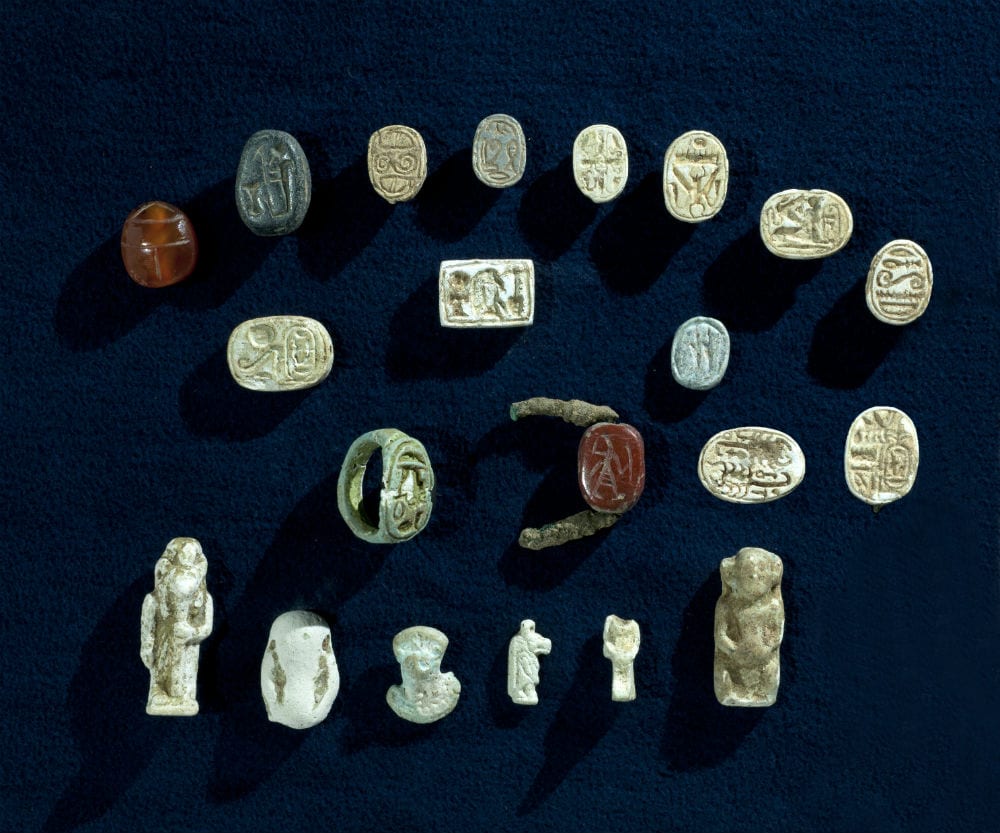 Archaeologists in Israel have uncovered evidence of an ancient Egyptian influence in the land of Israel long after the Biblical exodus from Egypt, the Israel Antiquities Authority (IAA) announced last week.

“The Israelites left Egypt; however, it seems that even years after their return Egypt did not leave the Israelites and their descendants,” said IAA archaeologist Amir Ganor, who directed an excavation in a cave in the vicinity of Kibbutz Lahav in southern Israel this past year.

The Unit for the Prevention of Antiquities Robbery discovered an underground cave which showed evidence of plundering while conducting excavations in the Tel Halif region. They conducted a salvage operation to save the relics dating back 3,000 years.

More than 300 pieces of pottery were found, some still intact, along with “dozens of pieces of jewelry made of bronze, shells and faience, unique vessels fashioned from yellowish alabaster, seals, seal impressions and cosmetic vessels,” according to the press release.

Ganor, who directs the Unit for Prevention of Antiquities Robbery, said, “Among the many artifacts that were discovered, most of which are characteristic of the Judahite culture in the south of the country, we found dozens of stone seals, some of which are shaped in the form of a winged beetle (scarabs) and bear carved symbols and images typical of the Egyptian culture which prevailed in the country in the Late Bronze Age. Some of the seals were fashioned on semi-precious stones that come from Egypt and the Sinai Peninsula.”

Some of the artefacts were made in Egypt and transported to southern Israel, but others were made locally, using materials on hand but fashioned after Egyptian custom and process.

According to Dr. Daphna Ben-Tor, curator of Egyptian archaeology at the Israel Museum, most of the scarab seals found can be dated to the fifteenth–fourteenth centuries BCE, when Canaan was under Egyptian rule.

Dr. Amir Golani of the IAA explained that Egypt was a powerful entity at the time, exerting both political rule and cultural influence across the region. “Along with an administration of Egyptian officials in Israel, a group of local elite evolved in the country, who adopted many of the Egyptian customs and their artistry,” he said.