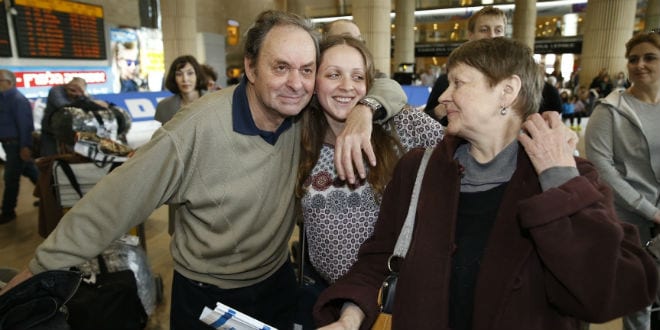 110 new Ukrainian immigrants landed in Israel on Tuesday morning, March 24, just in time for the Passover holiday. The majority of newcomers are refugees who fled the fighting zones in the eastern part of the Ukraine including the husband of a woman killed by a direct rock hit that slammed into their house in early February.

Launched by pro-Russian separatists at the city of Donetsk, a rebel stronghold in eastern Ukraine, the rocket killed Irina Shelkayeba, a teacher, as she was cooking supper. More than 6,000 people have been killed in eastern Ukraine during the conflict.

Irina’s home was completely destroyed and the family was left with no property. Her niece, Liora Nissim who lives in Israel, assisted Irina’s family with the decision to make aliyah to the Jewish state and met Irina’s husband and family members in an emotional reunion at Ben Gurion Airport.

“I made aliya myself 17 years ago as part of the Na’ale program, while my family remained in Donetsk in eastern Ukraine,” said Liora Nissim.

“My family lived next to the airport, an area in which the difficult battles were waging. This continued on and on and they waited all this time for it to finally end. It is hard to leave home, especially when war is raging outside,” she explained.

Liora said that she that heard that the International Fellowship of Christians and Jews (IFCJ) were organizing refugee flights and immediately contacted the organization.

“The IFCJ representative contacted my broken family that fled under heavy shelling to the city of Dnieper and a month and a half afterwards they were on their way to Israel.”

The family and the rest of the refugees came in a special flight sponsored by the IFCJ, which has decided to increase its efforts in bringing thousands of Jews from countries in distress. In the past three months alone, the IFJC has managed to rescue 560 newcomers from Ukraine. This was the organization’s third special flight since December.

Many of the newcomers are battle refuges from the Ukraine while others have been harshly affected by the economic state of the country from the beginning of the revolution.

Consequently, the IFCJ decided that the newcomers will receive additional monetary aid in addition to the regular absorption pack and the benefits newcomers are entitled to by the Israeli Ministry of Immigrant Absorption.

The IFCJ also contacted mayors across Israel who happily recruited themselves to the mission of helping the newcomers adapt into their cities.

IFCJ’s president, Rabbi Yechiel Eckstein commented that “every generation has its own miracle of Exodus.”

“After years of involvement in the bringing of the newcomers from the former Soviet Union and Ethiopia, the IFCJ is excited to be a central activist in the enterprise of rescuing the Jews of Ukraine that have experienced over a year now an on-going emergency crisis.”