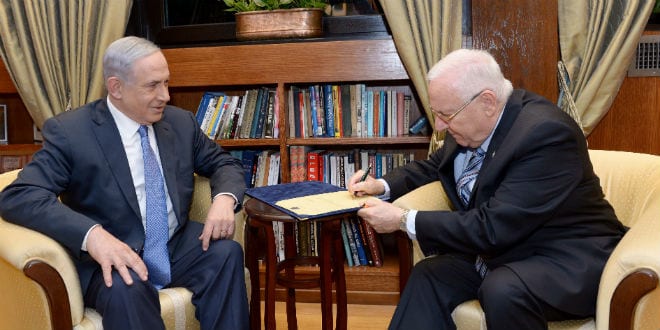 At a special ceremony at the President’s Residence in Jerusalem, Rivlin signed the official letter of appointment in his office with Prime Minister Netanyahu.

President Rivlin also commented that the country must not go back to elections in another two years.

“Sir, you receive today the appointment of forming the government. You have been awarded the trust of this dear people, ‘the dwellers of Zion.’ With the current challenges which lie before us, upon you rests the heavy responsibility to build a stable, and as inclusive as possible government, and as soon as can be achieved.”

“We stand behind you, as you embark upon this important, and complex task,” said Rivlin.

The Israeli president highlighted some of the missions that lay ahead for the incoming government and Knesset, emphasizing that the first issue to be addressed was the relationship between Israel and the United States, “the most important of our allies.”

Prime Minister Netanyahu responded that he was moved by the magnitude of the responsibility of forming the government. “I view myself as Prime Minister of each and every citizen of Israel. I will act to mend the rifts which opened up between the different segments of society during the elections.”

“We must put the election behind us, and focus on that which we have in common,” the Israeli prime minister said.  “This is the way of a Jewish, democratic state, which maintains the rights of its citizens regardless of their faith, race or sex.  So it has always been, and so it always will be.”