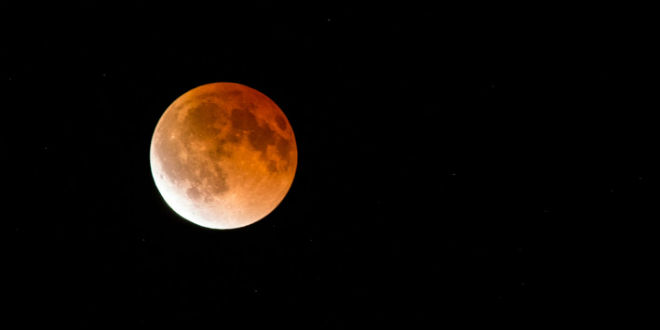 Pastor John Hagee released on Monday a new film entitled “Four Blood Moons” to examine the tetrad of Blood Moons occurring over the 2014-2015 years during the Jewish festivals of Passover and Sukkot.

“Four Blood Moons” is a docudrama that explores this supernatural occurrence in which science, history and Scripture all align in the examination of a rare lunar phenomenon that has, over the centuries, accompanied both tragedy and triumph for the Jewish people.

A Blood Moon occurs during a lunar eclipse. When the earth comes between the sun and the moon, the sun shines through the earth’s atmosphere, casting a shadow on the moon and making it turn red.

According to Hagee, who also authored a book with the same title, “The heavens are ‘God’s billboard. He’s been sending signals to earth, and we haven’t been picking them up.”

He explains the spiritual significance of the Blood Moons relates directly to today’s modern political sphere. “Two sets of blood moons, in 2014 and 2015, point to dramatic events in the Middle East and, as a result, changes in the whole world,” he said.

Only three times in the past 500 years have four of these blood moons (which make up a tetrad) occurred back to back and on major Jewish holy days. What happened in the past around such occurrences?

In 1493, Spain’s rulers completed their expulsion of all Jews and explorer Christopher Columbus discovered America, an eventual safe haven for the Jewish people. The tetrad began one year after the expulsion itself, which occurred in 1492. In 1948-49, when the second of these tetrads occurred, the State of Israel was founded.

The third tetrad occurred in 1967 and 1968, which was the year of and the year after the Six-Day War in which Jerusalem was unified and the State of Israel expanded to include the biblical heartland.

Now, in 2014-2015, the safe haven for Jews has already been created, but the concepts, ideas and thought generated by these lunar appearances has begun causing both Jews and Christians to more deeply explore and understand the roots of their faith.

This is where Root Source, a new organization that aims to bridge the gap between members of the two faiths through mutual learning in an informal and loving manner, steps into the picture.

The organization created a  free eBook, “Blood Moons 101”, and is offering a brand new lecture to tackle the spiritual ramifications of the Blood Moons. It is through such classes as these that Root Source enables and encourages dialogue and relationships between Christians and Jews, and empowers Christians to learn like Jews have been learning for centuries.

“Our members are often surprised at how quickly they can learn deeper biblical truths from Orthodox Jewish teachings and directly and practically apply those teachings to their own Christian faith,” said Bob O’Dell, one of the co-founders of Root Source. “Current and planned courses cover topics such as Jewish Prayer, Torah and Hebrew Scripture, Jewish Life, Hebrew Language, History of Israel, and Jewish interpretation of current event.”

O’Dell, in addition to being one of the co-founders of the organization, is also a hi-tech entrepreneur and philanthropist and a pro-Israel Christian with experience in different streams of the Christian faith.

O’Dell told Breaking Israel News that “the main reason this 2014/15 tetrad is important, is that it is the first time since the discovery of these tetrads falling on Feast Days by Mark Biltz in 2008, that we are actually going through one of them. Now as to the meaning of this particular tetrad, I will be sharing my views about this in the Root Source Blood Moons video series, but I don’t plan to talk about that publicly until after that lesson has been released to our subscribers.​”

O’Dell points out what is surprisingly different in this tetrad from the ones that came before it. ​”The 2014/15 tetrad is interesting in that unlike 1967, 1948, and 1492, there has not been any event at that level of significance occurring in 2013.​ Once again, I will offer our students an answer, but not until that lesson is released publicly in next week.”

​When asked how the Sabbatical year in Israel, during which Jews are commanded to let the land lay fallow, affects the tetrad, O’Dell was equally secretive preferring to keep his cards close to his chest until Root Source students hear the answer.

“The effects of the Shemittah and the effects of the Blood Moons I believe are somewhat different and therefore it will be very difficult for anyone to separate out what  events are related to which of these!”