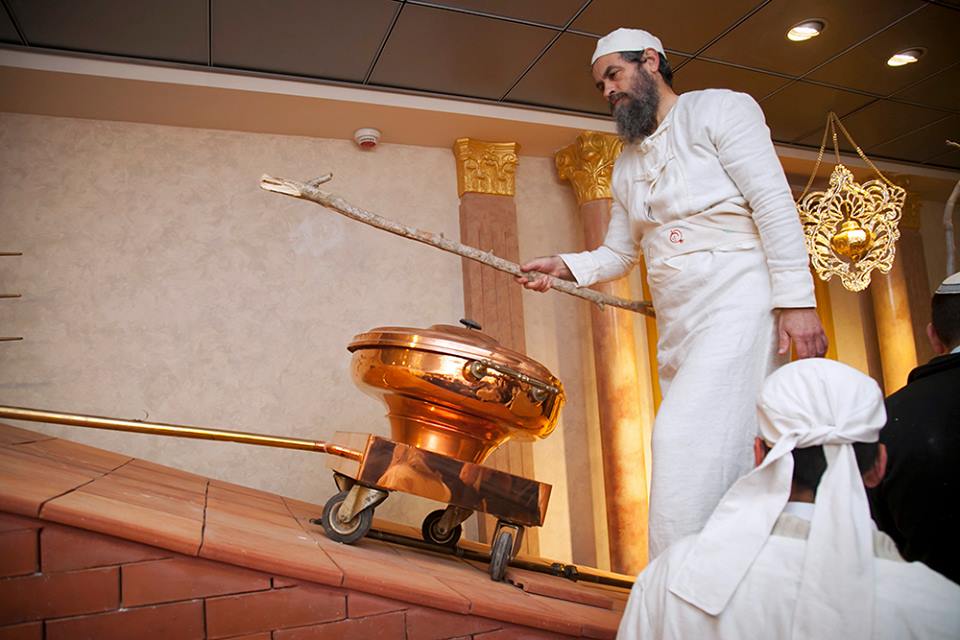 As Breaking Israel News reported earlier this month, the Temple Institute in Jerusalem has completed the construction of the stone altar required for the sacrificial service in the Holy Temple. In response to several inaccuracies in both the Hebrew and English media due to lack of information, the organization released its first detailed statement about the exciting event.

The altar was completed late in 2014, and officially inaugurated during the Institute’s public kindling ceremony for the Golden Menorah on the seventh night of the Hanukkah holiday, which fell on December 22.

Contrary to what was reported earlier, the height of the altar is not five meters (16 ft), but five amot, a Biblical measurement equivalent to roughly 2.35 meters (7.7 ft). Each amah measures 46-38 centimeters (18-19 inches). The ramp leading up to the altar is 16 amot long.

These measurements are in accordance with the opinion of Maimonides, the renowned medieval Jewish commentator and philosopher. This represents the smallest possible dimensions for a Kosher (permitted by Jewish law) functioning altar.

According to information released by the Temple Institute, since the Torah forbids the use of hewn stones in an altar (see Deuteronomy 27:5-6), it “consists of an outer frame of earthen bricks, oven-baked to withstand the extreme heat of the altar when in use. This outer frame is filled with natural stones, untouched by metal implements, as per Torah imperative. The outer brick frame is covered with a thin white plaster, as was done with the altar that stood in the Holy Temple courtyard.”

The base of the altar contains two portals for collecting the blood poured during animal sacrifices, in accordance with the Torah. It is also crowned with four raised corners, called horns by the Torah.

One thing that makes this altar unique is that it was designed to be disassembled and quickly reassembled in its correct position on the Temple Mount. According to the Temple Institute, “The people of Israel are required to build an altar exclusively on the site of the original altar on Mount Moriah, the Temple Mount. When circumstances become favorable, this new altar can be quickly re-assembled on the proper location, enabling the Divine service to be resumed without delay.”

The altar is temporarily on display at the Temple Institute, located in the heart of the Old City of Jerusalem, with most of its outer frame and the bottom edge of its base removed to show the inner filling stones. The entire altar project is part of the Institute’s goal of relearning the knowledge of the Temple service, thus its construction was for instructional as well as practical purposes.

The altar was designed by architect Shmuel Balzam, who is also drawing up the plans for the Third Temple. Those plans are the fruit of an Indiegogo crowdfunding campaign, which raised over $100,000 towards rebuilding the Temple Sanctuary. The preliminary stages of the project will be presented March 25, at an International Temple Mount Awareness Day event.