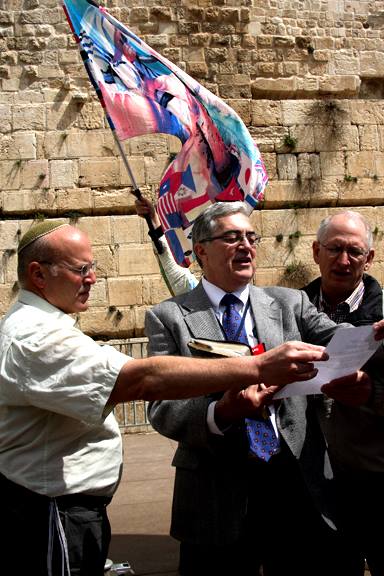 Although Friday’s solar eclipse over Jerusalem was only partial, the enthusiasm of a group of worshipers near the Temple Mount was total. Organized by Root Source co-founder Gidon Ariel, a diverse group of Christian tourists prayed for God’s protection of Israel for two minutes during the exceedingly rare solar eclipse.

“The Lord has placed His sign in the heavens with the four Blood Moons on the Jewish feasts and the solar eclipse on Nissan 1,” said Allan Parker from San Antonio, Texas. “It was an incredible honor to pray with our Jewish brothers to the Holy One of Israel, the God of Abraham Isaac and Jacob.”

Root Source, an online platform for Christians to learn Jewish and Biblical topics from Israeli teachers, organized the global call to prayer. Hundreds of live participants from all over the world followed Ariel’s prayer service live over the internet.

The 2015 Blood Moon and solar eclipse frenzy led many Christian tourists to Israel, including Pastor Keith Johnson from Minnesota. According to his website, Johnson’s “Signs of the Times Tour” was scheduled for participants “to be in the land during the 2015 solar eclipse that is smack-dab in the middle of the four Blood Moons” in order to discover “what all of these signs of the times mean while traveling around Israel with our eyes, our ears, and our Bibles open.”

At Friday’s lively prayer service and with shofars blasting, Ariel explained the historic significance of Jews and non-Jews praying together near the site where both Jewish Temples once stood.

“King David called this place ‘a House of Prayer for all Nations’ and how prophetic is it that we are standing here today at God’s appointed time with people from so many nations and across the world,” said Ariel.

“We were happy that Times of Israel covered our prayer service and were shocked that the Washington Post and Huffington Post had articles as well,” explained O’Dell to Breaking Israel News. “And just to restate, Gidon and I never said this solar eclipse signaled Judgement Day nor the apocalypse. Yet, neither did we see it as meaningless, and so we felt the most important response we could make to God’s signs in the Heavens, would be to turn upward in prayer, not downward in fear.”

With its own Twitter hashtag “#2minofprayer,” the Root Source prayer campaign went viral on social media. Their Facebook page grew by 1,000 “likes” in just one week, with participants from Uganda to Texas uploading videos encouraging others to pray.

The next solar eclipse over Jerusalem will take place in 2020. Allan Parker was glad he was with Ariel in person this time around to experience the Godly celestial phenomenon.

“Our love for Israel was deeply increased and we pledged our support for Israel and our Jewish friends. We will continue to pray for the peace of Jerusalem,” he said.