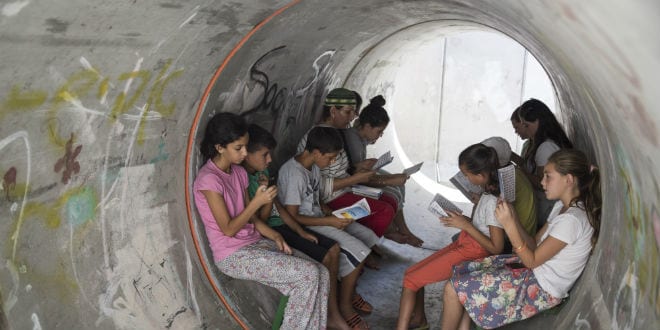 The Summit Institute recently launched a partnership with the Israel Trauma Center. The two organizations are working together to create a plan for helping foster children in the case of a national emergency, such as what occurred during last summer’s Operation Protective Edge.

“The working plan will enable us to operate more efficiently and know what each person in the organization has to do during times of emergency,” said Yoni Bogot, executive director for the organization, to Breaking Israel News.

The working plan, which should be ready within a few weeks, clarifies the mission objectives for emergency situations or situations in conflict. “This will help us work more effectively, and prepare our foster families as how to care for the children in times of emergency. How do we prepare ourselves and our staff down to every individual,” he said.

Summit takes care of many foster children who live in southern Israel, including the Gaza periphery. In addition to supporting foster families in areas in danger of Gaza rocket attacks, Summit also manages staff and social workers who function directly in the area and whose tasks are made far more difficult by the conflict.

“What was amazing in Protective Edge was that in spite of the country finding itself under attack and families in the south dealing with the attacks, eight babies, some of them coming directly from the hospital, found new foster homes in the Gaza periphery area,” explained Bogot.

Bogot recalled an incident in which a Summit social worker found herself under direct rocket fire while transporting a foster child to their new home.

“One of our social workers was under fire, literally, when she found a foster family for a one month old baby who was turned into foster care directly from the hospital in Assaf Harofeh. The social worker took the child from the hospital and when she left the children’s ward a siren went off forcing her and her new charge to take cover. A second siren then went off when the social worker arrived at the house of the foster family. Incidentally the family who took in the baby lives in the Gaza periphery, meaning that this child will now grow up with the threat of future conflicts always at hand.

“There were two such stories, one from Soroka Hospital and the other from Assaf Harofeh,” said Mira Werker, public relations officer for Summit, to Breaking Israel News.

“It did not bother either family that the war was going on. Both families were simply interested in fostering a child. They were in our system and waiting for a foster child. They were happy to receive the child regardless of the situation,” explained Werker.

Bogot added that “our staff needs to function, and function effectively even in cases of emergency, as do the families in which these children live.”

During the war, Summit helped six children find a home during the 50 day conflict. One 4-year-old went to live with a a family in Gaza periphery. Immediately, this child had to learn how to deal with sirens and living in a protected house.

Extra care was paid by Summit in supporting foster families and the children during the war. “We focused all of our attention to the families that work with us and we sent around packages for the children to have things to do in their protective houses and bunkers, and our staff all got in cars and went and drove to people’s houses to be with them, often one on one, whenever and wherever we could in order to help,” explained Werker.

“Hotels in Jerusalem put up the families for a day or two at a time. Any one of our families who applied for the vacation, received it. Whenever they called and there were rooms available, they received a free room. It was really quite touching,” said Werker.

As the operation continued on, Summit only went bigger.

Summit organized a respite holiday for all of the foster families who were in the Gaza periphery. Families vacationed over a weekend at two hotels by the Dead Sea.

“We gave them a much needed break from the trauma of the conflict,” said Werker. “We organized  lectures on how to deal with trauma, and held sessions where they were allowed to talk. We saw how much the families needed to talk. Not just the children but the families themselves. That was something that was really special for us.”

“Having the families meet up with each other and talk with each other was very helpful for them as well, and many of them wrote to us later to tell us just how much it helped them cope,” she said.

“We are grateful for our partners who were able to provide a few days of refuge from the south for families and children who have compounded trauma, for being in foster care as well as trauma from the sirens and conflict itself,” said Bogot.

The Summit Institute is responsible for the care of all foster children in Israel from Jerusalem and the south, including the areas most affected by any conflict with Gaza.