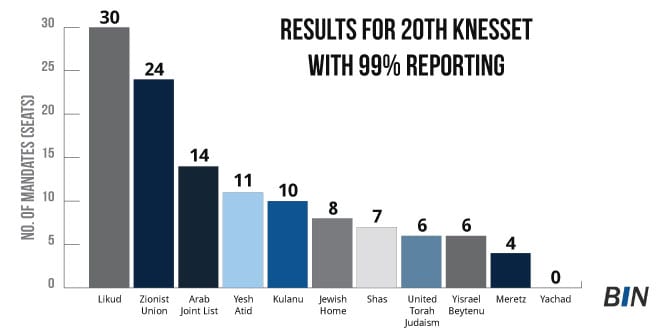 With 99 percent of the votes counted by early Wednesday morning, Netanyahu’s party appears to have garnered an astounding 30 seats out of a possible 120. The opposition party, Zionist Union, led by Labor’s Issac Herzog, won 24 mandates.

When polls closed Tuesday night at 10 pm, Israeli media went into a frenzy publicizing exit polls from across the country. With Likud and the Zionist Union neck and neck, votes counted overnight show a resounding victory for Netanyahu and right-wing parties.

The Likud announced that Netanyahu hopes to form a coalition with the Jewish Home, Kulanu, Yisrael Beytenu, Shas, and United Torah Judaism. Should all the parties agree to be part of the right-bloc coalition government, Netanyahu would be able to govern with some 68 seats.

In a gathering of supporters Tuesday night, Netanyahu said the results of the elections were a “great victory” for the nationalist camp in Israel.

“I am proud of the people of Israel who, at the moment of truth, knew how to separate between the important and the secondary issues and focus on the important ones,” said Netanyahu. Wednesday morning, Herzog called Netanyahu and unofficially conceded defeat. In a joint statement, Herzog and Livni said it was “a difficult morning for us, and for those who believe in our vision.”

Speaking to reporters outside his home, Herzog said he respected the nation’s decision to reelect Netanyahu and vowed that his party would focus on resolving the political and economic challenges facing Israel.

“I wished him luck, but let it be clear, the problems are the same problems, nothing has changed,” he said.

While 2015’s elections are record breaking in many ways, based on current results, more women will serve in the upcoming Knesset than ever before. Some 28 women will enter the 20th Knesset, as opposed to 27 in the 19th Knesset and 21 in the 18th Knesset.

Netanyahu hopes to form a government in the next two to three weeks.