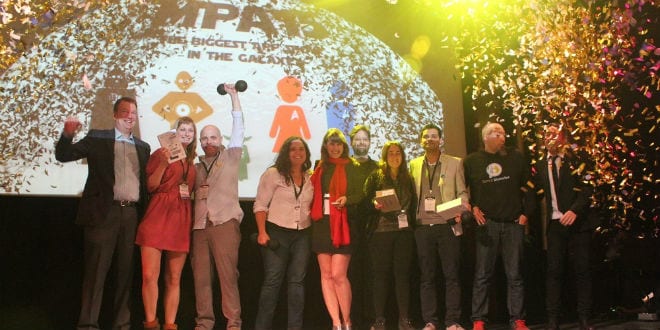 The app placed first among 800 other nominees as the contest, which has been described as the Oscars for the mobile world. Yaffe and Erez were chosen out of the 16 finalists who made the cut.

In 2010, the Israeli traffic and navigation app, the now internationally-known Waze, was the first place winner of the Mobile Premier Awards and went on to draw millions of users around the world.

Fansino is an app that provides musical artists the ability to communicate directly with their fan base as they are listening in real time across all major streaming services and mobile devices. On the other end, fans receive information about their favorite artists and upcoming concerts in their area. “The app allows both sides to communicate with one another, both the artist and the fan,” said the app designers.

“The idea is to help musical artists overcome a dwindling market in the area of music in the last few years and strengthen the relationship between the artist and his audience.”

“We believe that a like and a follow are meaningless. It means that someone dedicated a fraction of a second of their life to click a button. The fact that the big artists have 17 million fans on Facebook and 70 million followers on Twitter is meaningless,” explained the pair in an interview with Geektime. “We say focus on the people who spend at least three minutes of their life to listen to a song.”

The app also allows the musical artist to know who his or her fan base are and how much time they spend listening to their content. The technology identifies the fans that are the most serious, based on content consumption metrics and not via likes on Facebook or other social media barometers.

It was a long journey for Haran Yaffe, who was considered one of the most severely wounded soldiers of the Second Lebanon War in 2006 when his armored tank carrier was hit by an anti-tank missile.Yaffe underwent a long rehabilitation process and eventually returned to his music career as an alternative rock musician and to the start-up world. An active musician and public speaker, Yaffe also helps raise funds for disable army veterans.

Commenting on the purpose of the app, Yaffe told Geektime that the app would help musical artists make more money. “That basic connection that happens between an artist and his audience, we want to bring that back to life again. This is the juice that keeps musicians going. This is why artists work.”