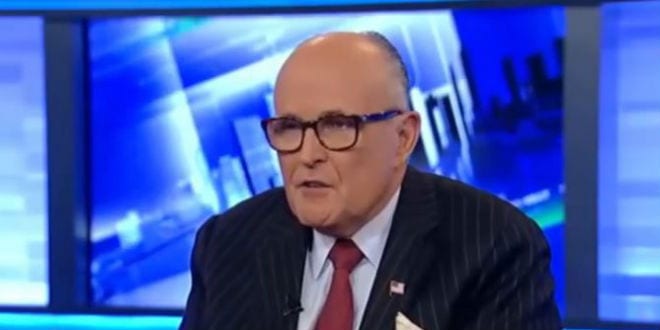 According to the Associated Press, Giuliani said Tehran “has proven to us that it shouldn’t be trusted with any kind of nuclear capacity.”

Giuliani urged the US government to take a stronger stance on Iran, or risk the kind of appeasement that took place in 1938 with Nazi Germany. Later, he told the press organization, “What [Obama] is doing with Iran right now is extremely reckless and it’s going to create an Iranian-controlled northern Middle East.”

The rally, which was organized by the National Council of Resistance of Iran, the country’s exiled opposition, took place in the Velodrom, a 10,000-capacity cycling arena. Most of the attendees were students from Poland or the Czech Republic, several of whom told AP they were offered transportation and a hotel if they attended.

Ongoing nuclear negotiations with Iran are a hot-button issue. While US Secretary of State John Kerry insisted recently that any deal would include verifiable limitations of Iran’s capacity for enrichment and nuclear armament, Iran’s vice president and head of atomic energy, Ali Akbar Salehi, said Saturday that the technical roadblocks to a settlement have been removed and “fake concerns” addressed, paving the way to a final deal favorable to Iran.

Although much of the focus of the negotiations has been on the US, Kerry said, “This is not a bilateral negotiation … and all of our partners are consistently sharing information, sharing ideas.”

The next round of negotiations is set to begin March 15. Participants will mainly include Iranian and US representatives, though a small European delegation will also attend. The hope is to reach an agreement by the end of June.

Iran has been subject to crippling sanctions from the West for its nuclear ambitions, which the Islamic Republic insists are only for peaceful uses. However, the country has been cited by the International Atomic Energy Agency for lack of transparency, and the agency cannot conclusively determine that Iran’s nuclear program is indeed peaceful.