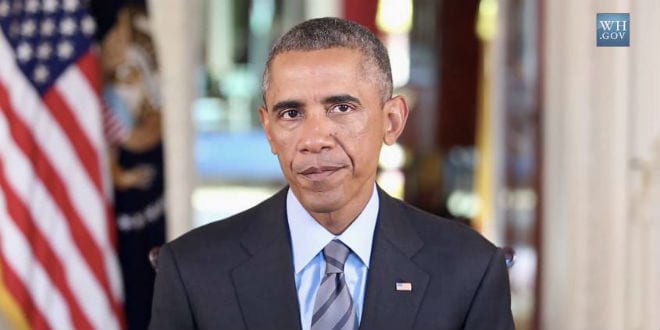 US President Barack Obama said that a letter written by Republican senators to Iran’s leaders makes some members of Congress appear to want to align themselves with Iranian “hardliners.”

The open letter, signed by 47 Republicans, warns Iranian leadership that any deal made under Obama regarding the Islamic Republic’s nuclear program may not be honored in the future.

Republicans made clear that without congressional approval, any deal made between the US and Iran would be an agreement made strictly between the president and Iran’s Supreme Leader, Ayatollah Ali Khamenei.

Obama, who termed the letter “an unusual coalition,” said he and his negotiators will be focusing their efforts on whether a deal can be struck with Iran with a March deadline quickly approaching.

The nuclear deal is a key element in the Obama administration’s foreign policy goals. The president has repeatedly warned that any action in opposition of nuclear talks will place the entire process in jeopardy of failure.

US Vice President Joe Biden slammed Republican lawmakers for their “highly misleading” letter, which he described as “false as it is dangerous.”

“The letter sent on March 9th by 47 Republican Senators to the Islamic Republic of Iran, expressly designed to undercut a sitting president in the midst of sensitive international negotiations, is beneath the dignity of an institution I revere,” Biden said in a statement.

The vice president added that the Republican letter “ignores two centuries of precedent and threatens to undermine the ability of any future American President, whether Democrat or Republican, to negotiate with other nations on behalf of the United States.”

Biden warned that the letter “sends a highly misleading signal to friend and foe alike that our Commander-in-Chief cannot deliver on America’s commitments.”

“The decision to undercut our president and circumvent our constitutional system offends me as a matter of principle,” Biden wrote.

The White House responded angrily to the letter, accusing Republican senators of continuing a “partisan strategy to undermine the president’s ability to conduct foreign policy and advance our national security.”

Spokesman Josh Earnest accused senators of using a “back channel” with hardliners in Iran. He added that the letter “raises significant questions about the intent or the aims of the authors.”

Earnest accused Republicans of advocating for military options against Iran should nuclear negotiations fail, which Obama officials have said would only temporarily set back Iran’s nuclear efforts.

“The rush to war, or at least the rush to the military option that many Republicans are advocating, is not at all in the best interests of the United States,” he added.

In response to the letter, Iranian Foreign Minister Mohammad Javad Zarif said that the move was “mostly a propaganda ploy.”

In a statement released by the Iranian mission to the UN, Zarif said it was “very interesting that while negotiations are still in progress and while no agreement has been reached, some political pressure groups are so afraid even of the prospect of an agreement that they resort to unconventional methods, unprecedented in diplomatic history.”

Zarif “expressed astonishment that some members of US Congress find it appropriate to write to leaders of another country against their own president and administration.”

The foreign minister said the letter “indicates that like [Prime Minister Benjamin] Netanyahu, who considers peace as an existential threat, some are opposed to any agreement, regardless of its content.”

“I wish to enlighten the authors that if the next administration revokes any agreement with ‘the stroke of a pen,’ as they boast, it will have simply committed a blatant violation of international law,” he warned.