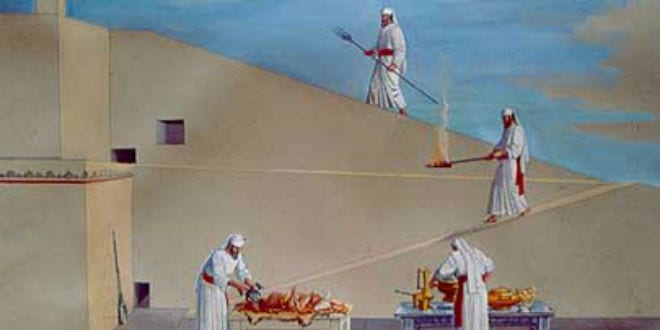 The Temple Institute in Jerusalem has announced that it has finished building an altar suitable for the Temple service. The altar, which took several years to build, can be operational at little more than a moment’s notice, reported Matzav Haruach magazine.

The Temple Institute is committed to preparing all the necessary clothing and tools for the rebuilt Holy Temple in Jerusalem. In addition, the institute operates an educational center for visitors and a preparatory training program for members of the priestly family who wish to be ready to serve as soon as the Temple is rebuilt.

The altar is a central component to the Biblical sacrificial service. In fact, there were separate altars for the incense and for other sacrifices.

The larger altar sat in the outer courtyard of the Tabernacle, and later the Temple. It was approximately five meters (16 feet) tall and 16 meters (52.5 feet) wide, with four “horns”, or raised corners, and a ramp.

According to the Bible, the altar may not be made out of stones hewn by metal implements. The altar prepared by the Temple Institute, under the direction of architect Rabbi Shmuel Balsam, follows this requirement.

It is constructed instead from bricks fired at roughly 1,000 degrees Celsius (1,832 degrees Fahrenheit), to withstand the immense heat of the Temple’s eternal flame and the weight of the sacrificial animals. Its measurements conform to the interpretation of Maimonides.

What makes the altar so unique is that it can be disassembled and reassembled easily, allowing it to be transported quickly and efficiently from its current location, on display at the institute, to the Temple Mount when the time comes. It was inaugurated in December 2014 and is now ready for use. With Passover around the corner, and the Passover sacrifice a central component of the traditional celebration, perhaps that time will come soon!

Editors note: New details have been released about the construction of the altar. To find out more, click here.