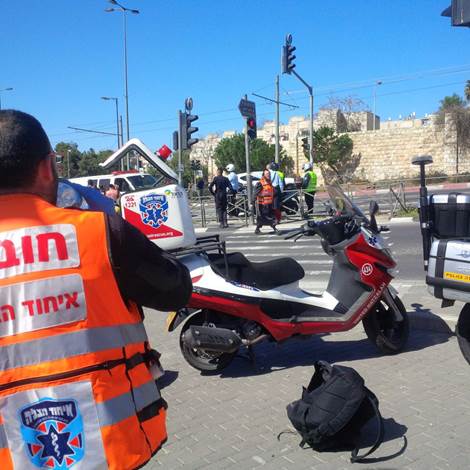 A car-ramming terror attack has left at least five people injured Friday morning near a Jerusalem Light Rail station in the northern part of the city.

A Palestinian man drove his private vehicle into a group of pedestrians, including one person riding a bicycle. After hitting the pedestrians, the terrorists iemerged from his vehicle with a butcher’s knife and attempted to stab nearby civilians.

A Border Policeman at the scene, with the help of a Light Rail security guard, quickly shot and incapacitated the terrorist.

“A young man rammed his car (into pedestrians), and then got out and tried to stab people,” police spokeswoman Luba Samri said in a statement.

The attack occurred near a Border Police station located on Shimon Hatzadik Street, on the line separating East and West Jerusalem.

Five people were treated at the scene of the attack by paramedics before being evacuated to nearby hospitals. Three policewomen were among those listed as injured. The terrorist is reported to be in serious condition.

United Hatzalah volunteer Dr. Aryeh Yaffee was one of the first on the scene of the attack and helped treat the victims, who suffered from light to moderate injuries.

“United Hatzalah and all security rescue personnel are unfortunately too well experienced in responding to these incidents, but this is in fact what helps save lives,” he said.

Initial reports indicate that the attacker was a resident of the East Jerusalem neighborhood of Ras al-Amoud.

The attack comes in the midst of the Purim holiday and a day after Palestinian Authority President Mahmoud Abbas said he would be ending security cooperation with Israel.