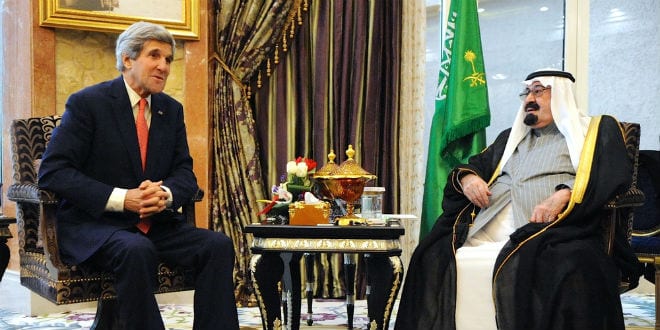 In Saudi Arabia, U.S. Secretary of State John Kerry met with leaders from Gulf Arab states as part of an attempt to ease their growing concerns over nuclear negotiations with Iran.

Following a meeting with Saudi King Salman and Foreign Minister Prince Sad al-Faisal, Kerry said that the U.S. is not seeking a “grand bargain” with Iran and the U.S. will not “take our eye off of Iran’s other destabilizing actions in places like Syria, Lebanon, Iraq and the Arabian peninsula, Yemen particularly.”

“Let me underscore: we are not seeking a grand bargain. Nothing will be different the day after this agreement, if we were to reach one, with respect to all of the other issues that challenge us in this region,” Kerry said.

Despite Kerry’s reassurances, Prince Saud al-Faisal remained concerned about Iran’s efforts to assert its power in the region, citing reports that Iran is involved in Iraq’s efforts to retake Tikrit as part of operations against the Islamic State, and that Iran’s power could grow once sanctions are lifted as part of a nuclear deal.

“The situation in Tikrit is a prime example of what we are worried about. Iran is taking over the country,” Prince al-Faisal said.

Saying that Netanyahu “hit the nail right on the head” in his assessment of the Iranian threats in the Middle East, Faisal wrote that Netanyahu “managed to accurately summarize a clear and present danger, not just to Israel (which obviously is his concern), but to other U.S. allies in the region.”

Abbas also slammed President Barack Obama for not realizing these threats, writing that Obama is “the only stakeholder that seems not to realize the danger of the situation” and that he is “now infamous for being the latest pen-pal of the Supreme Leader of the world’s biggest terrorist regime: Ayatollah Ali Khamenei.”