The Story Behind Marble Moses in Netanyahu’s Speech

Home » The Story Behind Marble Moses in Netanyahu’s Speech 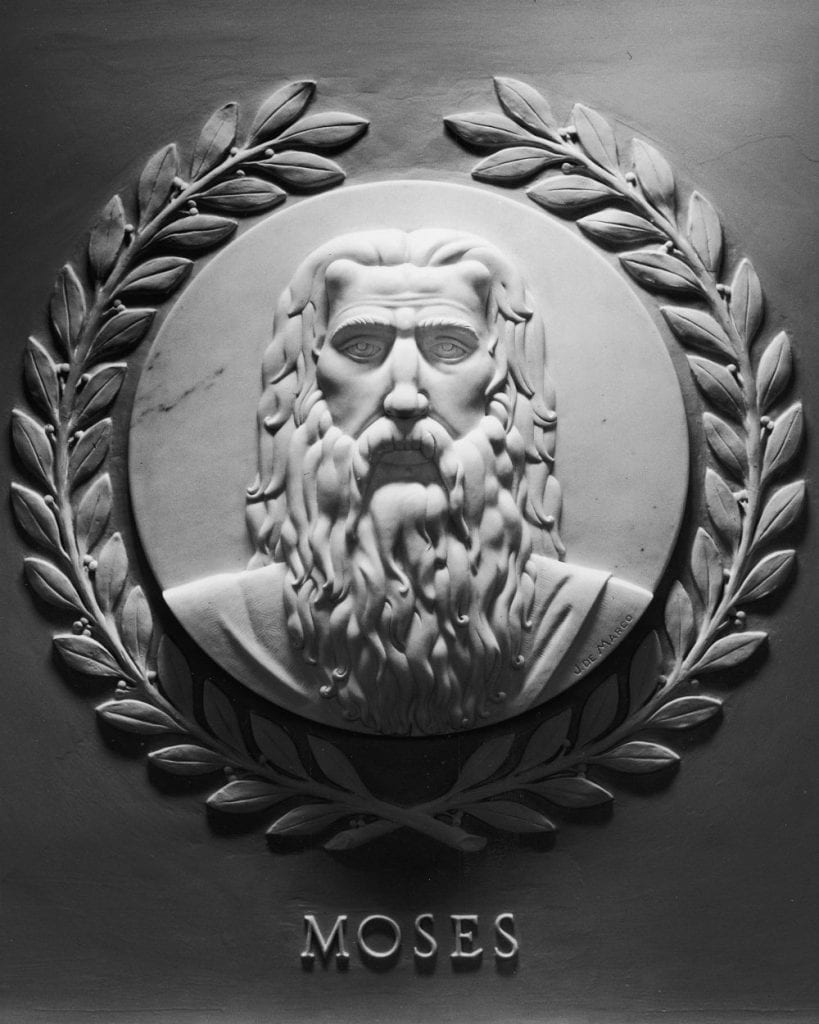 While Israeli Prime Minister Benjamin Netanyahu referenced several cultural, political, and historical figures throughout his highly-anticipated speech to Congress on Tuesday March 3 – including Harry S. Truman, Queen Esther, Robert Frost, and Elie Wiesel – he concluded his historical address with the biblical figure of the prophet Moses.

The Israeli prime minister did not just mention Moses in passing, he also pointed to the image of Moses in the form of white Vermont marble relief, hanging over the gallery doors overlooking the lawmakers in the House of Representatives Chamber.  Netanyahu spoke of the biblical leader, saying “Moses led our people from slavery to the gates of the Promised Land. And before the people of Israel entered the land of Israel, Moses gave us a message that has steeled our resolve for thousands of years.”

It was probably the first time that the marble relief portrait of Moses hanging in the House Chamber ever received such public acknowledgement.

The portrait, designed by artist Jean de Marco, is one 23 marble reliefs that depict historical figures noted for their work in establishing the principals that underlie American law, according to the Architect of the Capitol, a U.S. government website. The site is devoted to providing historic and current information about the function and architecture of the U.S. Capitol Building where Netanyahu gave his speech before a joint-session of Congress.

On either side of the portrait of Moses, there are 11 profiles in the eastern half of the chamber that face left and eleven in the western half, which face right, so that all look toward the full-face relief of Moses in the center. He is described on the site as a Hebrew prophet and lawgiver, who transformed a wandering people into a nation and received the Ten Commandments.

The other profiles include writer of the Declaration of Independence and the third president of the U.S., Thomas Jefferson; King of Babylonia, Hammurabi; Sultan of the Ottoman Empire, Suleiman; Athenian statesman, Solon; Napoleon I, and Maimonides, among other significant leaders from different periods of history.

The image of Moses and other leaders of civilizations and societies have been hanging in the chamber for 65 years. Scholars from the University of Pennsylvania and the Columbia Historical Society of Washington D.C. chose the subjects with the help of authoritative members of the Library of Congress over six decades ago. A special committee of five Members of the House of Representatives and the Architect of the Capitol approved the selection, and the reliefs were installed when the House Chamber was remodeled from 1949-1950.

Prime Minister Netanyahu at the end of his speech quoted Moses from the Book of Deuteronomy, stating in Hebrew, “Be strong and resolute, neither fear nor dread them,” which were the leader’s parting words to the Israelites before they entered the land of Israel.  For Netanyahu, they were words that highlighted the strength of friendship shared by the United States and Israel, two countries with a deep respect for the timeless road of history and the challenges along the way.