Bibi and the Bible: Word of God Invoked by PM During Address to Congress

Home » Bibi and the Bible: Word of God Invoked by PM During Address to Congress 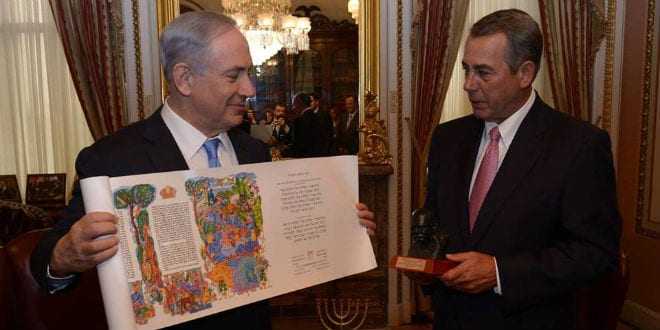 Despite all the controversy surrounding the invitation, Israeli Prime Minister Benjamin Netanyahu addressed a joint session of the US Congress Tuesday. He came to represent “The People of the Book”, and in doing so he made certain to reference that Book.

What is the significance of the two passages Netanyahu chose to quote from the Bible?

The first passage he referenced is a timely one; he drew the parallels between the situation of the Jewish people today and the time, 2,500 years ago, when they faced similar danger at the hand of another Persian leader.

The story of Esther is particularly appropriate as, Netanyahu pointed out, Wednesday night the Jewish people celebrate the holiday of Purim, which commemorates that very story.

At that time, Persian King Ahasuerus ruled over 127 provinces, or all the known world of the day. His viceroy, Haman, had a burning hatred for the Jewish people, and manipulated the otherwise peaceful Ahasuerus into permitting him to order the deaths of all Jews in his empire.

Were it not for the bravery of the Jewish Queen Esther, who risked her life to bring Ahasuerus’s attention to Haman’s wicked plans, the Jewish people would have been wiped out on this very day. All these events took place in the region that is modern-day Iran.

Like Esther, Netanyahu risked his political life to bring benevolent America’s attention to the Persian plot to destroy Israel and all the Jewish people. A nuclear Iran would pose an existential danger to the State of Israel, as Iran’s leaders have on many occasions expressed a desire to wipe the Jewish state off the world map.

The destruction of the state, however, is not enough, just as it was not enough for Haman to take down only his Jewish enemy, Mordechai. Haman plotted to wipe out all of Mordechai’s people, just as Iranian-backed Hezbollah leader Hassan Nasrallah has expressed, “If all the Jews gather in Israel, it will save us the trouble of chasing them down around the world.”

Netanyahu also concluded his speech with another Biblical reference, this time to Moses, who led the Children of Israel out of Egypt and through the desert for forty years. In his farewell speech to the people, Moses encouraged them to be brave and strong, to have faith in God and not be intimidated by the enemies they would inevitably face.

Netanyahu appealed to US Congress, which sits under an image of Moses himself, to stand with Israel, to be brave and strong, and not be intimidated by the common enemy the US and Israel face: a nuclear Iran.