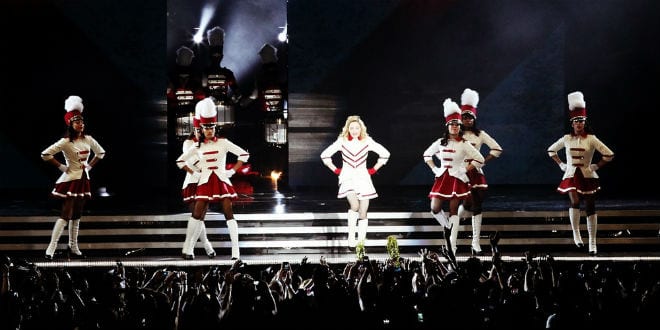 During an interview with Europe 1 radio, Madonna said “anti-Semitism is at an all-time high” in France and throughout Europe. Going even further, she said, “We’re living in crazy times. It feels like Nazi Germany.”

Madonna came down hard on France, explaining that the European nation has lost its way and is no longer a beacon of diversity and tolerance.

“It was a country that embraced everyone and encouraged freedom in every way, shape or form – artistic expression of freedom,” Madonna said. “Now that’s completely gone.”

She continued, “France was once a country that accepted people of color, and was a place artists escaped to, whether it was Josephine Baker or Charlie Parker.”

This is not the first time Madonna has spoken out against bigotry. In 2012, she described Marine Le Pen and her National Front party of France as “fascist.”

In the Europe 1 radian interview, which aired Friday, Madonna said what drove her to speak out against intolerance three years ago is even more pressing today.

“It’s not just happening in France, it’s all over Europe. But particularly in France. … The level of intolerance is so enormous, it’s scary,” she said.

Madonna, 56, was raised a Roman Catholic, but for nearly two decades has been a follower of the Jewish mystical teachings of Kabbalah. In July 2013, she and her ex-husband, director Guy Ritchie, celebrated their son Rocco’s bar mitzvah at The Kabbalah Centre in New York City.

By performing in Israel on numerous occasions, Madonna has defied the Boycott, Divestment and Sanctions movement against the Jewish state. In 2012, Tel Aviv was the first stop on her world tour, and has repeatedly said she is “in love with Israel.”