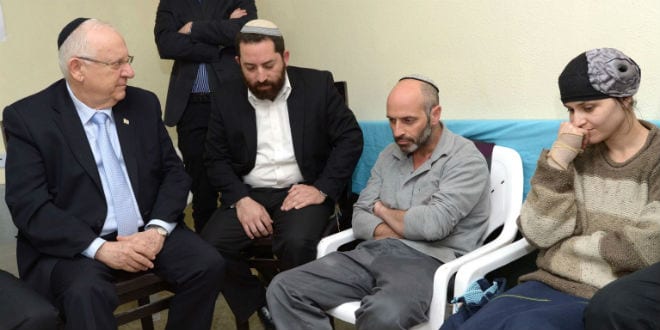 On Monday evening, February 23, Israeli President Reuven Rivlin paid a condolence visit to the parents of Adele Biton, 4, the toddler who was critically injured by a Palestinian rock attack on her family’s car two years ago, and passed away last week from respiratory complications from a lung infection.

“I have come here to offer comfort in the midst of your terrible grief,” the president told the family. “Adele touched all of our hearts, and indeed became a symbol.”

“Her fate pains me – as president and as a citizen,” said the Israeli president.

Adele was critically injured when a barrage of stones thrown by Palestinian youths at passing vehicles on the Trans-Samaria Highway caused her family’s car to crash into a truck in March 2013 as the family was driving home from a visit to their grandmother.  Adele’s two older sisters, Naama and Avigail and their mother, Adva suffered from light to moderate injuries while Adele remained in intensive care for months due to traumatic brain damage.

Adele was only released home in September 2014, with limited mobility, after her family home in the northern Samaria community of Yakir, was fitted with the proper facilities to care for her. “Every day she was home was a day of joy,” said her grandmother, Rachel, noting that Adele would respond to her with her own kind of signals, although she could not eat on her own.

“Adele’s cries were heard around the world,” said Rivlin to the Biton family during his visit. Her mother, Adva, told the president that she received worldwide support during the ordeal. “I received support and countless phone calls from across the globe. Adele touched the souls of so many,” she said.

“I am not befitting of all that, but it was Adele who gave me strength. Adele was the light of the house, silently, and without speaking, she gave us strength,” responded her mother.

Last week, Muawiya Qabha, the Arab medic who saved Adele on the night of the attack and who kept in touch with the family for the past two years, eulogized her, saying that “words can’t explain the pain I feel and tears are choking my throat.”

“How could a superhero be defeated? It’s just not possible,” said Qabha. “Adele, my little girl, you were a hero when you were alive and you will continue to be one in your death.”