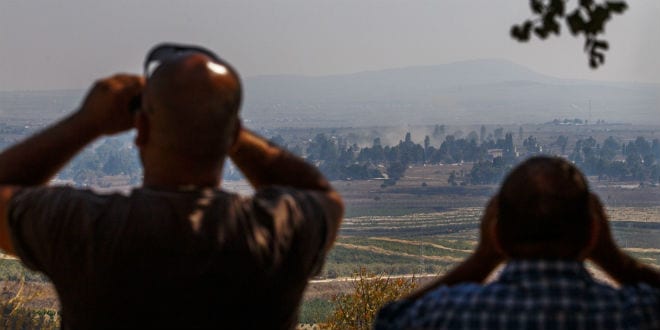 In 2013, both the Iranian and Syrian governments made statements expressing a desire to open up an anti-Israel front across the entire northern border of Israel.

In May 2014, Iranian Revolutionary Guard Corp (IRGC) senior official Hossein Hemedani announced that Iran has trained some 130,000 Iranian Basij fighters who are ready to enter Syria at a moments notice to attack Israel.

Over the past two years, neither governments have strayed from their desire to destroy the Jewish state.

Recently, Iran has made good on its word by setting up a direct presence of Iranian forces in Syria. Intelligence officials believe Iran is attempting to set up a Syrian version of the Lebanese based terror group Hezbollah in the Syrian controlled half of the Golan Heights.

Israeli Prime Minister Benjamin Netanyahu warned on Sunday that Iran is indeed attempting to open up a “third front” against Israel via Hezbollah in Syria.

“Alongside Iran’s direct guidance of Hezbollah’s actions in the north and Hamas’ in the south, Iran is trying to also develop a third front on the Golan Heights via the thousands of Hezbollah fighters who are in southern Syria and over which Iran holds direct command,” he stated at the start of the weekly cabinet meeting.

This shift in Iranian tactics – taking up direct involvement against Israel’s northern border rather than acting by proxy as they have done with Hezbollah in the North and Hamas in the south – is rapidly changing the playing field between Israel and its enemies.

Over the past two years, there have been numerous attacks against Israel’s northern border, which Israel says were planned and instigated by Iran and Hezbollah. Incidents include rocket fire, mortar attacks, roadside bombs, drone attacks and weapons transfers to Hezbollah.

For its part, Israel has retaliated via pinpoint strikes in Syrian territory, such as bombing missile deliveries and allegedly attacking senior Iranian officials who are operating in Syria.

Iran’s presence in the Golan opens up a widening front on Israel’s northern border, which now stretches from Rosh Hanikra to Quneitra. Up until now, the status quo of the Golan Heights has been relatively quiet since the Separation of Forces Agreement of 1974.

It is well know that Iran is no friend to Israel. However, with this unfolding development along the northern border, Israeli security and defense officials are heightening security across the country.

Israeli officials are keeping their eyes on the pitched battle currently taking place in Syria’s southern Dar’a province, where IRGC soldiers are publicly fighting alongside Assad’s forces against Syrian rebels. The Dar’a province is a crucial foothold for power of both Assad and the rebels.

According to a report by Middle East Media Research Institute (MEMRI), “This joint effort to wrest control of the southern Syria front from the hands of the rebels is regarded by Syria, Iran and Hezbollah as part of their struggle against Israel and its allies.”

“A victory in this region will bring the Iranian forces closer to the Jordanian border in the south and the Israeli border in the west, will prepare the ground for defeating the opposition forces in the Quneitra area, and will enable the creation of a territorial continuum of resistance axis forces stretching from Dar’a through Damascus and Quneitra to Lebanon.”

With the enemies at the gates of the country, the ramifications for Israel may be dire. While the Israeli defense establishment is certainly worried as to what will become of the region, for now, all seems quiet on the northern front.