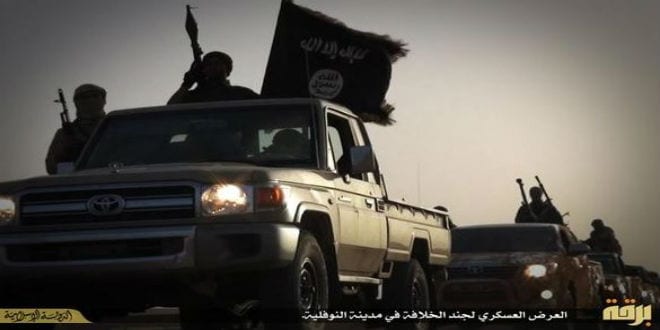 The Islamic State (ISIS) is not the only one recruiting supporters worldwide. A Christian militia group is fighting back with outsiders of its own.

Dwekh Nawsha, a Christian militia whose name is an Assyrian-language phrase conveying self-sacrifice, is standing up to ISIS as the terror group tries to stamp out Christianity in Iraq and Syria. The group is accepting foreign recruits, as are other groups in the area, AFP reported.

Brett (not his real name) is one of those foreigners. He told AFP, “One man’s terrorist is another man’s freedom fighter, but here we’re actually fighting for the freedom of the people here to be able live peaceably, to be able to live without persecution, to keep the church bells ringing.”

Brett, 28, served in the US army in Baghdad in 2006-2007 and has now returned to fight ISIS on behalf of the local Christian population, forced to flee to nearby Kurdistan as ISIS advanced towards al-Qosh. The Islamic State onslaught has put the continued existence one of the world’s oldest Christian populations into question.

Brett explained he wants to establish a “foreign fighters’ battalion”, and has already brought in five volunteers from the US, Britain and Canada, all with military or contracting experience. He claims he has another 20 volunteers lined up.

Recruits have a number of reasons for stepping forward. Louis Park is the first person Brett brought in. Having retired from the US Marine Corp in December, Park, from Texas, says, “I did not adjust well at peace time. I wanted to get back out here.”

He began saving money to join the battle even before his retirement. “I’m patriotic as hell,” he says. “If my government won’t fight them I will.”

Another volunteer, Andrew, from Canada, was motivated by rumors he heard of “slaughterhouses” where ISIS allegedly removes victims’ organs for sale on the black market. Though no evidence exists for such activities, the story is being circulated among evangelical organizations, especially in North America.

Freedom-fighting isn’t for everyone, though. A number of Westerners who initially joined  the Syria-based Kurdish “Popular Protection Units” (YPG) have since left, disillusioned. Some, like US army veteran Scott, object to YPG’s socialist leanings. Jordan Matson, however, a former American soldier currently fighting with YPG, has a different conclusion. He believes the intensity of the fighting in the region is too much for some people.

“Most of the Internet cowboys have come to realize this isn’t a normal deployment,” he told AFP. “So they lose the stomach to come or stay.”