10 Hours as a Jew in the Streets of Paris: Would You Survive? (VIDEO)

Home » 10 Hours as a Jew in the Streets of Paris: Would You Survive? (VIDEO) 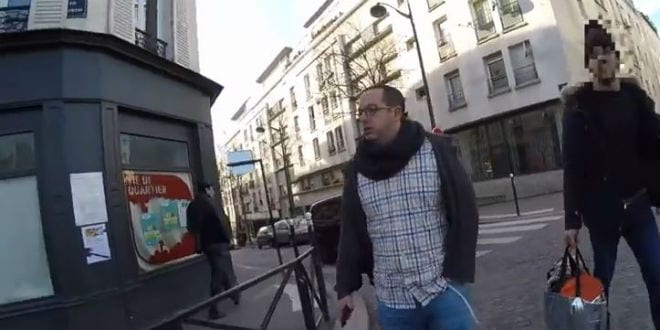 A brave Israeli journalist took to the streets of Paris while openly wearing a yarmulke and tzitzit (fringes) to test French attitudes towards Jews.

The results, which were captured on camera, are startling.

Zvika Klein, a reported for the NRG news website, spent ten hours walking around Paris and its outlying suburbs accompanied by a bodyguard and hidden cameraman. Multiple threats and anti-Semitic insults were hurled in his direction.

In one incident, a man wearing a black knit cap muttered “Jew” and walked alongside Klein in a clear form of intimidation. In two other incidents, a man and a women spat on Klein as he walked pass them.

In Paris, passerby’s yelled out “Vive Palestine.” Others called him a homosexual and said that he came to their neighborhood looking for sex. Passing by a group of teens, one of the girls called out, “Look at that – it’s the first time I’ve ever seen such a thing.”

Klein walked through neighborhoods that are known to be predominately inhabited by Muslims. In his report, Klein writes, “At times it was like walking in downtown Ramallah. Most women were wearing a veil or a hijab, most men appeared to be Muslim, and Arabic was prevalent everywhere.”

“We decided ahead of time that I was to walk through these areas quietly, without stopping anywhere, without speaking to anyone, without so much as looking sideways,” he continued. “My heart was pounding and negative thoughts were running through me head. I would be lying if I said I was not afraid.”

The video, titled “10 Hours of Walking in Paris as a Jew,” was inspired by a viral video by Shoshana Roberts who captured repeated sexual harassment she endured as a woman walking through the streets of New York.