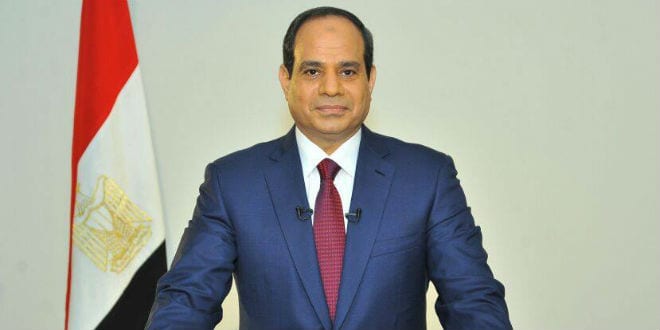 A spokesman for Egypt’s Armed Forces General Command announced the airstrikes on state radio. According to the statement, warplanes targeted high level ISIS sites, such as weapons caches and training camps, before returning safely to Egypt.

The strikes were “to avenge the bloodshed and to seek retribution from the killers.” Egyptian state-run television aired footage of Egyptian fighter jets taking off to carry out the strikes.

“Let those far and near know that Egyptians have a shield that protects them,” the statement said.

The statement marks the first time Cairo has publicly acknowledged any military action in Libya, where radical Islamic terror groups have flourished over the last several years.

The strikes came hours after ISIS jihadists posted footage online of the beheadings of 21 Egyptian Christians. The hostages were all laborers who were working in the city of Sirte. They were taken captive in December and January.

The 21 hostages are shown wearing orange jumpsuits that have become typical in videos of ISIS hostages. The Christians are seen kneeling on a beach in the Libyan province of Tripoli. Behind them, black-suited captors wait.

A man, dressed differently than the other jihadists, address the camera with a North-American accent in English.

“All crusaders: safety for you will be only wishes, especially if you are fighting us all together. Therefore we will fight you all together,” he said. “The sea you have hidden Sheikh Osama Bin Laden’s body in, we swear to Allah we will mix it with your blood.”

The Christians are then laid face-down on the sand and simultaneously beheaded. Pointing to the red-stained water, the speaker says, “We will conquer Rome, by Allah’s permission.”

As the men are being beheaded, a subtitle on the video declares: “This filthy blood is just some of what awaits you, in revenge for Camilia and her sisters.”

Camilia Shehata and Wafa Constantine were wives of Coptic priests whose conversion to Islam sparked a sectarian dispute in Egypt in 2010.

Egyptian President Abdel Fattah al-Sisi vowed to punish the “murderers” responsible for the beheadings and declared seven days of mourning in Egypt.

In an address to the nation, the Egyptian president pledged greater resilience in the fight against terrorism and radical Islam.

“These cowardly actions will not undermine our determination. Egypt and the whole world are in a fierce battle with extremist groups carrying extremist ideology and sharing the same goals,” he stated.

The Coptic Church issued a statement and called on its followers to have “confidence that their great nation won’t rest without retribution for the evil criminals.”

The White House condemned the beheadings, calling them “despicable” and “cowardly.” Press Secretary Josh Earnest added in a statement that the barbarity of ISIS “knows no bounds.”

In Libya, the country’s air force announced it had launched airstrikes in the eastern city of Darna, which was overrun last year by ISIS affiliates. The Egyptian airstrikes come closely on the heels of Jordanian led strikes on ISIS targets in Syria following a video showing a captured Jordanian pilot being burned to death.

ISIS has made it a point to persecute Christians in the Middle East. In areas conquered by the jihadist group, Christians are forced to pay, convert or die. Thousands of Christians have been expelled from their homes and countless others killed at the hands of ISIS.