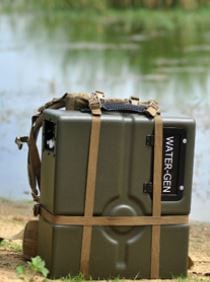 Attempts to create viable drinking water solutions in arid countries have failed for years. However, thanks to Israeli tech company WaterGen, you can now drink water right out of thin air.

With WaterGen’s newest portable device, water vapor in the air is turned into potable drinking water. Inspiration for the device came from a similar prototype the company made for use by IDF troops in the field.

The device, which is worn in portable backpacks, allows soldiers to purify water that has been found either from a natural body of water, irrigation water or water that is not sanctioned for use such as water tanks on captured roof tops.

The unit pulls water from the air, purifies it while removing dust and other particles, and creates pure drinking water, alleviating many of the logistical problems involved in transporting water.

While WaterGen first focused solely on having their device used by the IDF, it soon garnered interest from the US, UK and French forces in Afghanistan, Iraq and North Africa, as a more economically feasible way of transporting water.

In these Middle Eastern locales, transporting a liter of water can cost up to between $15 to $17 dollars per liter.

WaterGen Chairman and co-CEO Arye Kohavi says that a portable water producing system helps free the military from the need to transport water supplies in tanker convoys which have often been subject to attack in locations like Afghanistan.

India has also become interested in the devices for its civilian population, as it continually has difficulty finding enough sources of fresh water for its large population numbering close to 1.3 billion people.

With regards to civilian usage, WaterGen is developing household units that can dehumidify water from the atmosphere, from electrical appliances such as clothes dryers, as well as battery operated mobile water purification systems.

In many third world countries, as well as former Soviet countries, governments cannot provide enough drinking water for the populace and people need to rely upon packaged or bottled water. The costs of importing and purchasing this water can be exorbitant and many people cannot afford it.

In India, for example, the cost of a bottle of water is between 5-8 Rupee. The cost of usage of the WaterGen system for a litre of water is 1.8, rupee most of which is spent upon the electricity that the unit uses for dehumidification and purification.

WaterGen has won numerous awards in the fields of innovation and technology and Arye Kochavi was chosen as one of the world’s leading thinkers of 2014, according to Foreign Policy magazine.