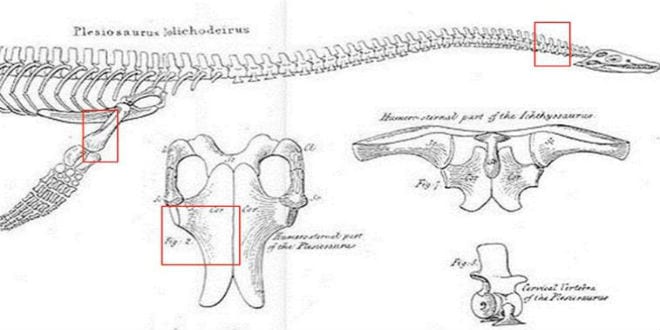 The fossilized remains of an ancient sea-faring carnivorous reptile were discovered in Southern Israel, researchers announced Tuesday. They are the oldest remains found in the Jewish State to date.

The Jerusalem Post, which reported on the discovery, conducted an exclusive interview with Dr. Sarit Ashckenazi-Polivoda, a geologist specializing in micropaleontology at the Dead Sea and Arava Sciences Center who analyzed the creature’s remains. She called the findings unprecedented.

The creature has been identified as an Elasmosaurus, a relative of the dinosaurs. Approximately 30 fossilized remnants of the creature were uncovered in the Arava Valley and pieced together over a period of months.

The initial discovery was made by an archaeologist and tour guide in 2012, who brought the remains to Ashckenazi-Polivoda’s colleague, Dr. Hanan Ginat, at Hebrew University. Ginat and Ashckenzai-Polivoda began analysing the remains and the environment in which they were found. Eventually, the uncovered more fossils from the same creature.

“The most exciting thing is that this is the first time that a single species’ bones [of this type] were found in the same place here,” Ashckenazi-Polivoda told the paper. “We’ve found similar fossils from 10 million years later, but never during this time.”

Using bone fragments, rock formations and microfossils, a team of researchers reconstructed the creature and its environment. They determined that the Elasmosaurus was eight meters (over 26 feet) long, with a neck that measured roughly one third of its body length. Ashckenazi-Polivoda determined the creature lived 85 million years ago.

“During that time, the area was covered in ocean water 200 m. (roughly 650 feet) deep; all of Israel was under water until 20-30 million years ago,” she said. “The sea had a lot of algae and plankton that bloomed then that attracted a lot of fish that fed on the algae, which the reptile ate.”

Discoveries of ancient reptile remains are rare in Israel. The only other findings of significance that match that of the Elasmosaurus are a dinosaur footprint uncovered in Jerusalem in the 1980s, and a 75-million-year-old reptile skeleton found in the Negev in 2005.

There is a great deal of discussion where dinosaurs fit into the Biblical account of creation. Jewish physicist Dr. Gerald Schroeder explains that the “great sea monsters” of Genesis 1:21 (also translated occasionally as serpents) are actually “great reptiles”, or in Greek — dino (great) saurus (reptile). He uses math and modern physics to demonstrate that the six days of creation actually took place over several millennia by today’s calculations.