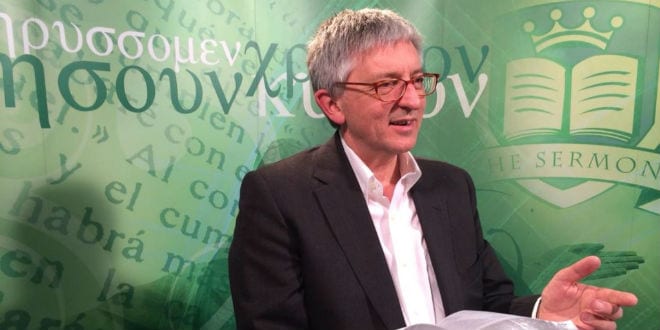 The Anglican church has come down hard on one of its own for repeatedly expressing and promoting anti-Israel and anti-Semitic views. The Diocese of Guildford of the Church of England determined that vicar Dr. Stephen Sizer had crossed a line with his “undisciplined commitment to an anti-Zionist agenda”.

Last month, Sizer posted a link to an Internet article titled “9/11 Israel did it” on his Facebook page. He pondered in his comments whether it was anti-Semitic, but concluded, it “raises so many questions.” The move was especially tasteless, coming as it did in proximity to International Holocaust Memorial Day.

Sizer has a long history of anti-Israel rhetoric. In 2013, he was investigated by the church on similar charges, and agreed to tone down his position, committing, according to UK Daily Mail, to have three people approve anything he wrote or linked before posting it online.

In October, however, he attended an Iranian conference debating the involvement of “Zionists” in the 9/11 attacks. He is also a regular participant and speaker at the annual Christ at the Checkpoint conference, which routinely denigrates Israel.

Initially unrepentant for his recent Facebook post, Sizer did eventually apologize, posting a follow-up on Facebook saying, “I very much regret and apologise for the distress caused by the reposting on Facebook of a link to an article about 9/11 from Wikispooks. It was particularly insensitive in that last week coincided with Holocaust Memorial Day. I removed the link as soon as I received adverse feedback, and realised that offence had been caused.”

“I have never believed Israel or any other country was complicit in the terrorist atrocity of 9/11, and my sharing of this material was ill-considered and misguided,” he added.

In an official statement on the church’s decision, Bishop of Guildford Right Reverend Andrew Watson said, “I do not believe that his motives are anti-Semitic; but I have concluded that, at the very least, he has demonstrated appallingly poor judgment in the material he has chosen to disseminate, particularly via social media, some of which is clearly anti-Semitic.

“By associating with or promoting subject matter, which is either ambiguous in its motivation, or (worse still) openly racist, he has crossed a serious line. I regard these actions as indefensible.”

The Diocese concluded that Sizer’s comments were “no longer compatible with his ministry as a parish priest,” and outlined conditions for his continued leadership of the Virginia Water parish. These include a six month complete ban from social media activity, and a lifetime ban from speaking about Israel and the Middle East, attending conferences on the subject, writing about it or allowing his name to be associated with it.

Any violation of this decision, “in letter or in spirit”, would require his immediate resignation.