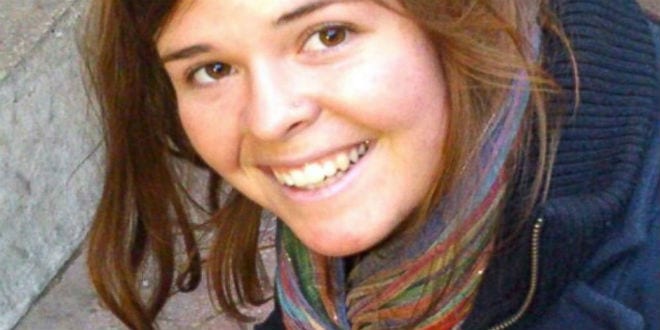 Kayla Jean Mueller, a 26-year-old aid worker from Arizona who was captured by ISIS in Syria, was confirmed dead by the US government.

Held secretly in captivity, ISIS announced on Friday that Mueller was tragically killed in a Jordanian airstrike in Raqqa when a rocket destroyed the building she was being held in.

For several days, neither Jordanian nor American officials could confirm her death. US President Barack Obama announced Mueller’s death on Tuesday and vowed to “find and bring to justice the terrorists who are responsible.”

While Mueller’s kidnapping was kept under wraps for over a year and a half, who exactly was Kayla Mueller?

According to a Haaretz report, Mueller had become a bit of an activist, organizing marches and events in support of the people in Darfur, Big Brothers Big Sisters, and other causes.

After graduating from Northern Arizona University in 2009, Mueller spent her summer volunteering for her latest cause, Palestinian “oppression.”

Working for the International Solidarity Movement, a pro-Palestinian activist group with ties to terrorists, Mueller lived in the East Jerusalem neighborhood Sheikh Jarrah “to try and prevent the takeover of their home by Israeli settlers.”

These homes were, in fact, deemed legally belonging to Jews after a 20 year court battle. The homes originally belonged to Jews but the inhabitants were chased out by Arabs in previous wars.

In several instances, Mueller served as a human shield, preventing Israel from demolishing the homes of convicted terrorists and suicide bombers responsible for the deaths of innocent Israelis after gaining legal clearance. She put her life in danger to protect radical Jihadists.

Mueller also worked in Hebron where she lived and protested against Israel. According to the report, “she also joined weekly Friday protests against the Israeli occupation in Bilin and other Palestinian villages, writing frequent blogs about those experiences.”

After leaving Israel, Mueller traveled around the world continuing her activist work. Eventually, Mueller made her way to Syria with her boyfriend and “not under any aid organization’s auspices.” Mueller met her boyfriend in Cairo and is described as a Syrian photographer and activist.

The boyfriend was hired to perform work at a Spanish MSF (Doctors without Borders) hospital in Syria. Taking longer than expected to complete his work, the couple was forced to spend the night inside of Syria rather than be transported back to Turkey.

Mueller and her boyfriend never made it back to the bus station to meet their transport. Both were captured by ISISI soldiers. Mueller’s boyfriend was eventually released.

Upon confirmation of Mueller’s death, her family released a statement saying they were “heartbroken” over the death of their loved one. Various media outlets reported that the family was sent a photo, via email, of Mueller’s body as proof.