Obama Implies Netanyahu Out of Line with Upcoming Speech

Home » Obama Implies Netanyahu Out of Line with Upcoming Speech 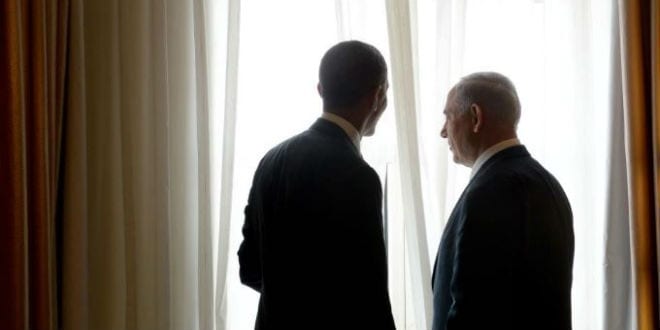 In yet another blow, US President Barack Obama said Monday that he and Israeli Prime Minister Benjamin Netanyahu have “very real differences” when it comes to the issue of a nuclear Iran and publicly signaled his displeasure over Netanyahu’s upcoming speech.

During a news conference with German Chancellor Angela Merkel in Washington, the president explained that he and other world leaders all agree that increasing sanctions on Tehran does not make sense, a position Netanyahu vehemently opposes.

“I don’t want to be coy,” Obama stated. “The prime minister and I have a very real difference around Iran, around sanctions.”

The president said that he, Merkel and British Prime Minister David Cameron all agree “that it does not make sense to sour the negotiations to a month or two before they’re about to be complete. And we should play that out.”

Obama argued for striving to reach a deal with Iran on its nuclear program. If any deal falls through, the president said he would be “the first to work” with Congress to impose sanctions on Iran, which he characterized as “narrow” and “not attractive.”

“But what’s the rush? Unless your view is that it’s not possible to get a deal with Iran and it shouldn’t even be tested. And that I cannot agree with,” said Obama.

Obama defended his decision to not meet with Netanyahu during his upcoming trip to Washington. Netanyahu is scheduled to address a joint session of Congress regarding Iran’s nuclear program shortly before Israeli elections.

The president implied that the prime minister was out of line.

Obama maintained that by not meeting with Netanyahu, he was maintaining the US-Israeli relationship, which he said should not “get clouded by what could be perceived as partisan politics. That’s something we have to guard against.”

However, for his part, the president did announce that there would be no extension of nuclear talks between Iran and the P5+1.

“I don’t see a further extension being useful if they have not agreed to the basic formulation and the bottom line that the world requires to have confidence that they’re not pursuing a nuclear weapon,” Obama said. “The issues have been clarified, gaps have been narrowed, the Iranians have abided by the agreement.”

Despite criticism and pressure within Israel and the US to cancel his speech, Netanyahu said Monday that he is “determined to travel to Washington and to present Israel’s position before the members of Congress and the American people.”

At a Likud party election event in Jerusalem, Netanyahu added, “A bad deal with Iran is taking shape in Munich, one that will endanger the existence of Israel.”

Obama, Vice President Joe Biden and a handful of Democratic lawmakers have announced their plans to skip Netanyahu’s speech, in boycott of what they said is a breach of protocol of diplomatic relations.