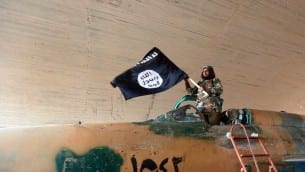 Jordan announced it has successfully carried out dozens of airstrikes against ISIS, as a senior US official confirmed Iraqi troops would soon launch a sweeping ground offensive against jihadists in the upcoming weeks.

Jordanian air force chief Major General Mansour al-Jabour said on Sunday that the Hashemite Kingdom has launched 56 air campaigns since Thursday as part of an assault against ISIS.

Jordan vowed an “earth-shattering” response against ISIS after the terror group captured one of its air force pilots, Maaz al-Kassasbeh, and burned him alive. His execution at the hands of ISIS was released in a gruesome video.

“On the first day of the campaign to avenge our airman Maaz al-Kassasbeh, 19 targets were destroyed, including training camps and equipment,” al-Jabour stated.

A video released by Jordan shows a highly choreographed mission of warplanes striking ISIS targets in Syria. “So far, the campaign has destroyed 20 percent of the fighting capabilities of Daesh,” Jabour stated, using an alternative name for ISIS.

Jabour estimated that since Jordan began carrying out airstrikes against ISIS, some 7,000 jihadists have been killed.

Jordanian Interior Minister Hussein Majali told media on Saturday that Kassasbeh’s murder was a “turning point” in the kingdom’s fight against ISIS and radical Islamic extremism.

According to John Allen, the US coordinator for the international coalition combating ISIS, “in the weeks ahead” a major ground offensive would commence by Iraqi troops to take out ISIS militants.

“When the Iraqi forces begin the ground campaign to take back Iraq, the coalition will provide major firepower associated with that,” he told Petra news agency.

Since the formation of the coalition in August, there have been more than 2,000 airstrikes on dozens of ISIS targets, including training camps, barracks, residential centers, fuel sites and ammunition depots.

According to US Secretary of State John Kerry, the airstrikes have reclaimed some 700 square kilometers (270 square miles) of territory captured by the terror group, or “one-fifth of the area they had in their control,” he said.

He added that the air war carried out against ISIS had “deprived the militants of the use of 200 oil and gas facilities…disrupted their command structure…squeezed its finance and dispersed its personnel.”

For over the last year, Israel has been providing the US with sensitive intelligence and satellite imagery on ISIS positions in the Middle East. Israeli spy satellites have better access to locations in the region than those of the US.

Rejoining the coalition is the United Arab Emirates (UAE), who had originally withdrew its support following the capture of the Jordanian pilot. According to state media reports, a squadron of UAE F-16 fighter jets arrived in Jordan on Sunday with a full team of pilots and technicians.

The US confirmed on Friday that UAE flights would most likely resume “in a couple of days.”

In addition, the US confirmed it sent weapons shipment worth $25 million to the Lebanese army, who are fighting against jihadists who are staging incursions against Lebanon from Syria.

In a statement by the US embassy in Lebanon, “support for the Lebanese military remains a top priority for the United States.”

“Recent attacks against Lebanon’s army only strengthen America’s resolve to stand in solidarity with the people of Lebanon to confront these threats,” the embassy said. “The United States is providing top of the line weapons to the Lebanese army to help Lebanon’s brave soldiers in their confrontation with the terrorists.”