Israel to Thank Philippines for Nearly a Century of Friendship

Home » Israel to Thank Philippines for Nearly a Century of Friendship 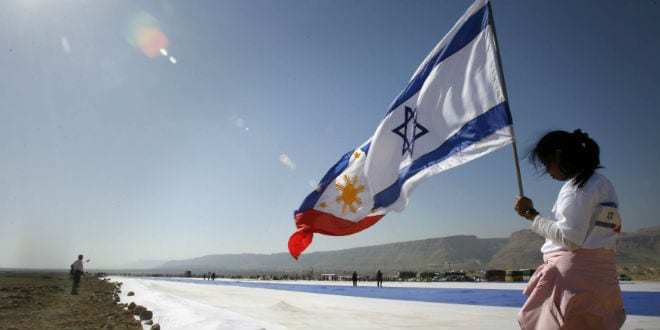 In recognition for close to 100 years of support and friendship from the Philippines towards Israel and the Jewish people, the Jewish country is kicking off a year-long celebration of cooperation under the title, “Thank you, Philippines”.

According to Deputy Chief of Mission Adam Levene of the Israeli Embassy in the Philippines, the year will mark increased coordination and sharing of expertise in fields which will help boost the Southeast Asian country’s economic standing in the world.

In an interview with ABS-CBN, Levene said, “Israel has always had a positive connection to the Philippines. Filipinos need not have visas to go to Israel, out of gratitude to what happened. Filipinos will always be able to come for a pilgrimage at the Holy Land. The door will always be open.”

He noted that the positive relationship between the two countries began even before Israel was a state. The Philippines, under President Manuel L. Quezo, allowed Jews to escape the Nazis in the 1930s, granting them visas and opening places for them to settle.

“The context at the time was war, human rights was not even discussed. In the Philippines, they said that this is what we think is right, we are going to step forward and do something about it. It says something very special about who Filipinos are. For us, it’s not just a story about saving Jewish people. It’s a story about the identity of Filipinos,” Levene added.

In 1947, under President Manuel Roxas, the Philippine vote became the tie-breaking voice in the UN to establish the State of Israel.

Interestingly, Levene pointed out, the presidents in 1947 and today were named Manuel. “Manuel is actually a Hebrew name, which means ‘God be with you’ or ‘with the help of God.’ It was very appropriate in both cases.”

The relationship between the two countries has become reciprocal. Israel was one of the first to reach out when the Philippines was hit by Typhoon Haiyan in 2013, dispatching 100 medical staff and equipment to the battered country. One family even named their baby, born in the aftermath of the storm under Israeli medical care, Israel.

In addition to Filipino foreign workers, most of whom serve in the caregiving industry, Israel has opened its doors to agricultural students wishing to learn from Israeli expertise.  While in Israel, some of the wealthiest people are involved in the agricultural field, in the Philippines, only the poorest are.

“The cooperation in agriculture between Israel and the Philippines has been there for a long time. But we think that in the last few years, there’s a lot more room to develop and expand the cooperation,” Levene said. “The Philippines has been growing rapidly, and getting bigger and needing more food. The balance is changing. The agriculture has to change as well in order to adapt to new needs. Climate change is also part of it.”

He noted that in Israel, farming is treated like a business venture, which is why agricultural giants have done so well for themselves. “It’s not a matter of doing things wrong. It’s a matter of things being done over time and into the right direction.”

Levene feels Israel can teach the Philippines from experience, as well as sharing agricultural technologies, such as drip irrigation, that it has developed. Beyond agriculture, Levene said there was room for cooperation in the fields of jewellery, homeland security, and anything that could benefit from Israeli innovation.

“What we are trying to do is open discussions with the Philippine government, different bodies, whatever field of cooperation. To see what’s relevant for your needs. You define your needs. We’ll see where we can help you,” Levene said.