Palestinian Mother Abandons Children to Take Up Jihad with ISIS 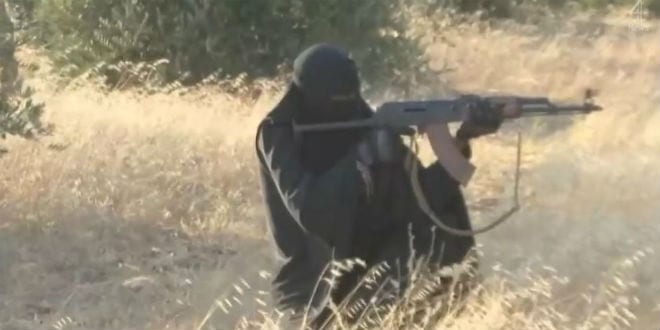 In what is becoming something of a trend, a Palestinian woman from East Jerusalem headed to Syria in order to join the Islamic State (ISIS).

According to Palestinian authorities, the woman is a mother who left behind her two children in order to answer the call of jihad.

The woman, whose name has remained classified, has taken up residence in Raqqa, Syria, a city notorious for being an organizational hub of the terror group’s activities in Syria and Iraq.

This is not the first time that Palestinians have opted for joining up with the extremist Muslim group. Back as far as August 2014, Palestinians in Gaza began aligning themselves with the ISIS rather than follow the “too moderate” Hamas. In September, numerous Palestinians headed to Syria to join ranks with IS.

Hamas, for their part, are trying doggedly to prevent the spread of ISIS support in Gaza.

Palestinian authorities have said that they are working together with Israeli security forces to prevent the establishment of any ISIS affiliated terror cells in Judea and Samaria.

Over the past few months, Palestinian security forces have cracked down on vocal ISIS sympathizers and arrested numerous individuals who spoke in favor of the terror group or were suspected of collaborating with them.

Many of these individuals have been released after being interrogated and held in prison for a short time.

Israel itself has arrested several citizens for their involvement with ISIS. It has been declared illegal in Israel to swear allegiance to ISIS since September. Under the guise of this new law, Israeli security and intelligence officials have arrested numerous members of several ISIS affiliated terror cells operating in Israel.

Under interrogation, it was revealed that the groups planned on carrying out terror attacks against IDF targets as well as civilians.