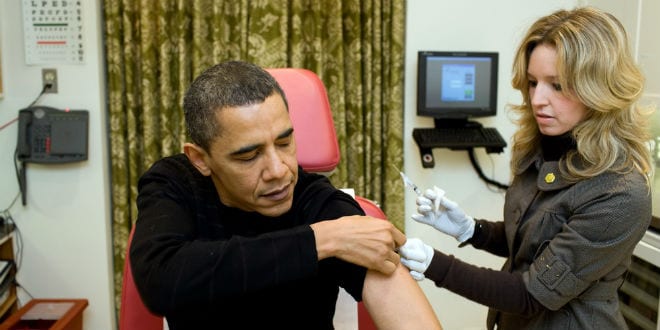 As the debate on vaccination heats up again in the U.S., some anti-vaxxers are requesting exemptions from vaccinating their children on religious grounds. But what do their faiths, including Judaism, actually say about the issue?

The recent outbreak of measles that began in the Disneyland theme park in southern California has led to the infection of more than 100 people who then potentially exposed countless others to the disease around the country.

This is not the first such outbreak of a disease thought to have been nearly eradicated in 2000. Last May, the Centers for Disease Control and Prevention (CDC) released figures showing that 288 cases of measles had been reported between Jan. 1 and May 23, 2014, the largest number of reported cases in the U.S. in the first five months of a year since 1994.

That “increase in measles cases [was] being driven by unvaccinated people, primarily U.S. residents, who got measles in other countries, brought the virus back to the United States and spread to others in communities where many people are not vaccinated,” said Dr. Anne Schuchat, assistant surgeon general and director of CDC’s National Center for Immunizations and Respiratory Diseases.

Also in 2014, 383 other people fell ill with measles in Ohio’s Amish country after catching the disease from unvaccinated Amish missionaries who returned from the Philippines with the virus. That outbreak, based on the number of the sick, was four times the current California outbreak, The Associated Press reported.

The year prior, the CDC announced 58 cases of measles among the Hasidic Jews in Brooklyn’s Boro Park and Williamsburg neighborhoods. Seventy-nine percent of the people who became sick in Boro Park were members of “three extended families whose members declined use of measles vaccine.”

There has been some opposition to vaccination in the haredi Jewish community in the U.S. In August of 2014, Rabbi Shmuel Kamenetsky called vaccination “a hoax” in an interview with the Baltimore Jewish Times. There is also an anti-vaccine Orthodox magazine titled P.E.A.CH that launched last April.

But according to the New York City Department of Health and Mental Hygiene, 96 percent of students at yeshivas in Brooklyn are still vaccinated, the Forward reported, and vaccination in general is highly common in that community, which likely limited the scope of a 2013 measles outbreak in Brooklyn.

In Judaism, no religious law actually forbids vaccination, even in cases where the vaccine includes gelatin, an ingredient made from pig tissue. The ban on consuming non-kosher meat does not apply to vaccines administered via injection.

An article titled “What the World’s religions teach, applied to vaccines and immune globulins,” written for the journal Vaccine in 2012 by John Grabenstein, a researcher at the vaccine-producing company Merck Vaccines, the Jewish value of pikuach nefesh means that believers must place the safeguarding of their own health as well as community-wide disease prevention above their individual desires.

Grabenstein concludes that “contemporary Jewish vaccine decliners are more likely to cite concerns about vaccine safety than to invoke a specific religious doctrine.”

In fact, when Tablet Magazine recently used a public immunization database of the California Department of Public Health to determine how many of 68 Jewish elementary schools cited by Private School Review had high rates of vaccine refusal, they found 14 such schools. At the same time, a 2005 ruling by the Conservative movement’s Rabbinical Assembly allows Jewish day schools to make immunizations compulsory in accordance with halacha (Jewish law).

In Christianity, which has its roots in Judaism, most contemporary denominations also do not object to vaccinations based on direct scripture or canon law.

One reason that members of some Christian denominations do oppose vaccination is over the use of cells from aborted embryos in the production of the rubella vaccine, and some other viral vaccines, back in the 1960s.

Churches that believe in faith healing, or in the general reliance on God and divine providence rather than on science, may also oppose vaccines. In addition, some conservative Christian groups have opposed the HPV vaccine because they see it as giving permission to young women to engage in premarital sexual relations.

Grabenstein’s article also states that in some Amish communities, those who decline immunizations might do so less out of religious beliefs and more due to a tradition of rejecting technology in general, limited access to healthcare, and limited knowledge of or exposure to information about vaccines and diseases.

In Islam, the “law of necessity” states, “That which is necessary makes the forbidden permissible.” Therefore, while Islam theoretically forbids any type of consumption of gelatin made from pork, exceptions can be made when there is no other choice.

In 2001, after consulting with more than 100 Muslim scholars, the World Health Organization announced that the use of gelatin in vaccines should be considered halal-certified and thus permitted. Five years earlier, more than 100 Islamic legal scholars met and clarified Islamic purity laws to indicate that when a substance is converted into another substance “different in characteristics,” this “changes substances that are prohibited into lawful and permissible substances.”

There has been Muslim opposition to immunization programs for the polio virus in countries such as Nigeria, Pakistan, and Afghanistan, but the objections, though often cited as religious in nature, were largely social. There were beliefs that the vaccines spread the HIV virus, or were being used to sterilize people, among other fears.

The view from the state level

In the U.S., 48 out of 50 states grant exemptions for parents to not to vaccinate their children on religious grounds, and applying for a religious exemption does not need to be a complicated process. A frequently cited example is New Jersey, where parents only need to sign a letter stating that vaccination would interfere “with the free exercise of the pupil’s religious rights.”

On Jan. 4, California Governor Jerry Brown, who previously preserved the religious exemption option in his state in 2012, said he is open to legislation that would eliminate all exemptions except for waivers on medical grounds. Brown’s announcement came in response to an earlier promise by five California state lawmakers to introduce legislation banning all religious and personal-belief exemptions on the vaccination of children before they enter the school system, the Los Angeles Times reported.

If such stringent legislation passes in California, or in other states, it would also affect those who, regardless of their faith, oppose vaccinations because they support the heavily criticized movement arguing that vaccinations can cause autism in children. Celebrities such as Jim Carey, Bill Maher, and Jenny McCarthy, whose son has autism, have long been promoting that idea to the American public.

“We are a non-vaccinating family, but I make no claims about people’s individual decisions,” Jewish actress Mayim Bialik has said. “We based ours on research and discussions with our pediatrician, and we’ve been happy with that decision, but obviously there’s a lot of controversy about it.”

This dispute between those who believe in the link between vaccines and autism and those who dismiss it, both in and out of the scientific community, shows no sign in letting up. But one statistic is not easily refuted. The CDC states that “more than 95 percent of the people who receive a single dose of MMR (the measles, mumps, and rubella vaccine) will develop immunity to all three viruses. A second vaccine dose gives immunity to almost all of those who did not respond to the first dose.”

But this means that some vaccinated people will still be susceptible to contracting the illness. Meanwhile, since some people cannot be vaccinated, either because they are too young or because they have health issues that preclude it, such individuals are also at risk when encountering a sick person who could have been vaccinated, but was not. This means that not vaccinating a child puts other people around that child at significant risk.

As Jewish mom Sally Kohn wrote in The Daily Beast on Feb. 3,“I’m embarrassed to say that the idea that we might be putting other people at risk by not vaccinating our daughter never really crossed our minds. We were focused on keeping our daughter safe, and little else. That was a mistake.”