“The jihadis will not stop here [Syria], the war will spread to Europe. What will England be like in ten or 15 years?”  – Archbishop Issam John Darwish of Furrzol speaking in 2012 (from Crucified Again, p. 246)

Although the Western world heard about the Charlie Hebdo attacks, similar and worse Islamic attacks in the Middle East remain unreported — despite the connection between the two.

On January 21, 2015, Homs, Syria “was targeted by a coward terrorist attack killing 20 Syrian civilians, and injuring others. An attack like the ones before it, done by the terrorists backed by the same world leaders marched in Paris less than 15 days ago.” 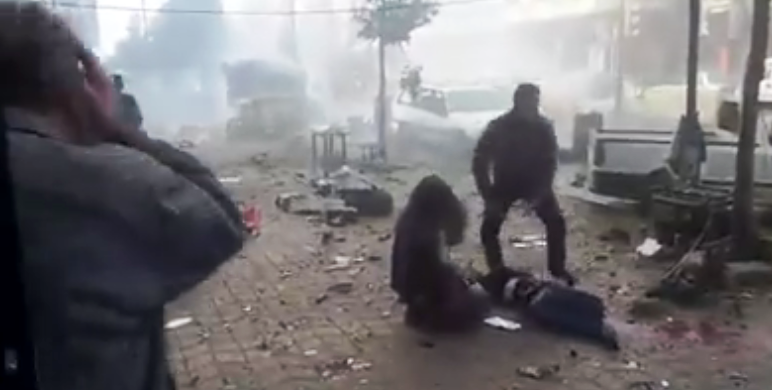 The graphic video of bodies strewn on the street and people lamenting can be seen here.

About this attack, historian of religions Hanne Nabintu Herland writes: “When terror hits Paris and Western people loose their lives, either Europeans or Americans, the whole world writes about it, and rightfully so. When terror hits civilians in Syria just days afterwards, nobody reacts.”

Continues the African-born Norwegian author, who, having lived two decades in Africa is familiar with both the atrocities that occur in that part of the world and the hypocrisy that meets it:

In reality, when speaking about human rights, we actually talk about the human rights of mostly white skinned Europeans and Americans. What we fight for is basically Westerners’ human rights, not universal human rights for all. There is little or no reaction when Arabs die, or like in this video from the war in Syria, when Syrian civilian lives are lost. In places like Syria, the West rather chooses to send in weapons and military aid that funds further disintegration and human suffering. This is Syria, the worst humanitarian catastrophe since the Second World War, with reportedly over 10 million internally displaced and refugees.