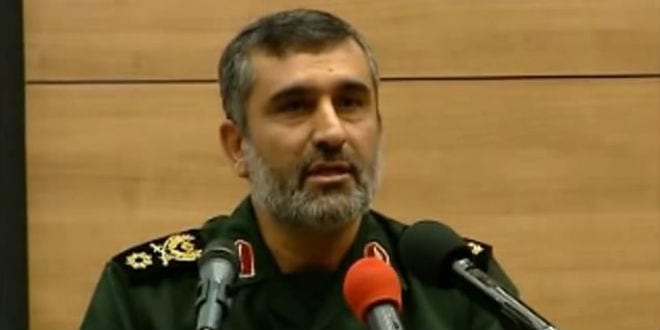 The commander of the Iranian Revolutionary Guard Corp’s (IRGC) missile division confirmed on Monday that his country has provided Hezbollah and Palestinian terror groups the technology to build short and mid-range ballistic rockets.

IRGC aerospace force commander Brigadier General Amir Ali Hajizadeh boasted that information was also passed on to the governments of Syria and Iraq on how to locally produce military grade rockets.

“The IRGC’s Aerospace Force has developed to a stage in the field of missile industries that it can mass-produce different types of short and mid-range missiles,” Iranian FARS news quoted Hajizadeh as saying.

“The Islamic Republic of Iran has helped Iraq, Syria, Palestine and the Lebanese Hezbollah by exporting the technology that it has for the production of missiles and other equipment, and they can now stand against the Zionist regime, the ISIL [Islamic State] and other Takfiri [apostate] groups and cripple them,” Hajizadeh said.

Israeli defense and intelligence officials have voiced their concerns over the years of the growing capabilities of Middle East terror groups, thanks to the sponsorship of the Islamic Republic.

Access to mid-range missiles by Hezbollah, Hamas and other terror groups that operate near the vicinity of Israel would put the entire country within striking distance of an attack. Last month, Hajizadeh announced that Tehran will “accelerate” the arming of Palestinian terrorists in Judea and Samaria to help carry out attacks against Israel.

Aside from providing terror groups with the technological know-how to build rockets, Hajizadeh also said that Iran was developing its own radar and drone technologies that will, in the future, be exported to its allies.

A recent report exposed the first satellite images of what is believed to be the first Iranian missile that is capable of launching a spacecraft, or carrying a conventional or non-conventional warhead. The missile, which measured near 88 feet long, is said to be able to reach “far beyond Europe.”

Israel has vowed that it would not allow Iranian sponsored weapons and technologies to fall in the hands of terrorists, especially Hezbollah. Over the last three years, amid the civil war raging in Syria, the IAF has reportedly carried out a number of airstrikes on weapons convoys headed to the Lebanese terror organization.

Last month, an IAF strike killed six Hezbollah operatives and their Iranian counterparts in the Quneitra region, near the Syrian side of the Golan Heights. Among the dead was a senior Hezbollah commander responsible for terror operations against Israel and decorated Iranian general Mohammed Ali Allahadi, who is said to have been advising Hezbollah on future war efforts with Israel.

Hajizadeh’s comments come in the wake of reports of a strengthening of alliances between Iran, Hezbollah and Hamas. Following the 50-day war between Israel and Hamas, the Gaza-based terror group is reaching out to its “big brothers” to provide more financial and military aid to carry out attacks against the “Zionist enemy.”

LISTEN BELOW: Forget Netanyahu’s Congress Invite. The Issue Is Iran!