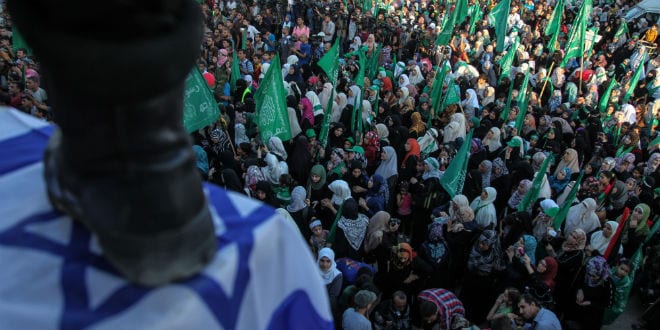 In a recent plea to help further their goal of destroying Israel, Hamas reached out to their two “big brothers”, Iran and Hezbollah. The Gaza-based terror group asked for more military supplies and an increase in financial aid to carry out more terror attacks against the “Zionist enemy.”

Senior Hamas official Mahmoud al-Zahar formally asked the two radical Islamic powers to help them in their fight against the only democracy in the Middle East.

According to the Iranian Fars News Agency, al-Zahar told Al-Manar TV over the weekend, “We stretch our hand of cooperation for materializing the Palestinian cause, because Palestine is an essential issue and more efforts should be put into it.”

He noted that Hamas needs Iran’s further financial and arms aid to continue its “resistance” against the Jewish state and “destroy the Israeli occupation.”

Using a somewhat different tactic than direct confrontation against Israel, al-Zahar called on Hezbollah to ready “Palestinian refugees” to take up positions outside of Israel’s borders in order to be prepared for an armed struggle with Israel.

Last week, Hamas met with political leaders of Hezbollah in Beirut to discuss cooperation between the two groups. Doha-based Hamas leader Khaled Mashaal is expected to visit Tehran in the next few weeks to further cement the alliance.

Following Operation Protective Edge this summer, during which much of Hamas’ arsenal was destroyed, and due to Egypt’s recent war on terror in the Sinai, Hamas’ arms supply has dwindled significantly. The terror group has been hard pressed to maintain its previous armaments and seems to be in dire need of outside support.

Hamas has made clear that it is gearing up for another conflict with Israel. The group has been testing a new generation of home-made rockets into the Mediterranean. Along with Islamic Jihad and other Gaza terror groups, Hamas has been using humanitarian supplies to rebuild its terror tunnel infrastructure to carry out cross-border attacks on the Jewish state.

Recently, Hamas boasted of its “terror training camps” in which some 17,000 Palestinian youth were trained as fighters as part of a militia to combat Israel. Hamas is gearing up for another armed conflict against Israel and is seeking the help of outside powers to maintain any military edge that they may have.

Hamas is attempting a last ditch effort to maintain control of the Gaza Strip. In the face of other outside terror groups who are attempting to seize power of the terror enclave, Hamas is turning to its allies once again come to their rescue.