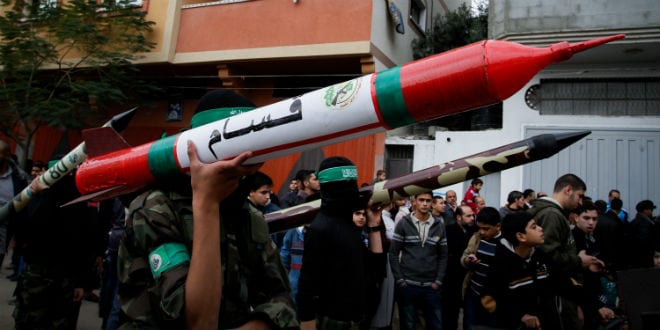 Hamas is testing a new generation of home-made rockets and rebuilding its network of underground terror tunnels, The Times of London reported this week.

Citing unnamed Israeli intelligence officials, the paper stated test rockets fired into the Mediterranean since September are seen as evidence that Hamas is trying to expand its weapons capabilities. According to Israeli media, officials confirmed the British report Monday, and the Israel Defense Forces backed it Tuesday.

Last summer’s Operation Protective Edge ended in a tense ceasefire between Israel and Hamas, and Israel’s defense establishment believes it was successful in deterring Hamas from another engagement in the near future. However, a mere three months later, it seems the terror organization had sufficiently rehabilitated its infrastructure to begin preparing for another onslaught.

Since September 16, Hamas has been firing test rockets towards the sea. The rockets have been registering on the Iron Dome radar system, setting off Red Alert alarms across Gaza border communities.

“This is a part of their domestic weapons production. We did not doubt, at the end of the war, that their focus would be on building more weapons. We monitor every such launch, noting the quality of the rocket and its range,” a senior navy source told The Jerusalem Post in the summer.

In December, it was reported that Hamas was using humanitarian supplies sent to rebuild the Gaza Strip in order to reconstruct its cross-border terror tunnels into Israel.

“The other side has not neglected this capability,” warned a senior engineering officer on Tuesday regarding the terror tunnels. “I believe that Hamas learned from the (past) campaign and it will only improve this capability ahead of the next round.”

In response, the IDF has decided to expand its special engineering unit, known as Yahalom (diamond), by hundreds of troops. Among the changes, Yahalom’s new commander, Yaron Beit-On, will be given the rank of Colonel instead of Lieutenant Colonel. The unit will be getting an additional combat squadron to specialize in subterranean fighting; another unit to focus on charting, identifying, and destroying the tunnels; and and increased tech support to face the technological challenges of underground warfare.

There is still no proven method to effectively detect underground tunnels, but progress is being made.

“There are a number of measures we have tried in recent months, with more than a few successes. We have tried different technologies which have made certain accomplishments, but they are limited and have not provided a complete response to all the challenges. The best of minds are helping us,” explained the senior officer.

“We saw that it was very challenging to destroy them and we had to insert a lot of explosives to destroy the tunnels; and we want to do it much faster,” he said. “We are talking about additional explosives measures, and we are making them part of training and preparation as soon as possible.”