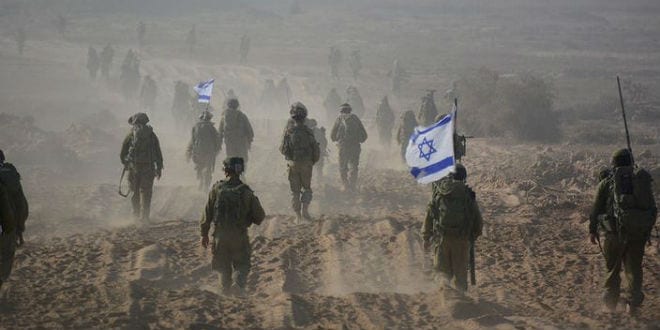 On Monday, IDF Chief of Staff Lieut. Gen. Benny Gantz approved the presentation of 53 outstanding officers, NCO’s, and soldiers, both active duty as well as reserves, with citations and awards befitting their outstanding service during Operation Protective Edge this past summer.

In addition to the individual awards, Gantz also awarded nine IDF units with medals and citations.

Among the recipients were Lieutenant Eitan Fund, who received the IDF’s highest award, the Medal of Distinguished Service, for his efforts to locate Hadar Goldin. Following Goldin’s capture, Fund entered the terror tunnel through which Goldin had been kidnapped together with another three soldiers, carrying only his gun. He had no protection. While he was unable to locate Goldin, he was able to gather enough evidence in order to prove that Goldin was indeed killed before being kidnapped.

On August 2, Omri protected one of his soldiers by using his own body to cover his comrade during a grenade explosion. He then risked his life to help evacuate the wounded. He had volunteered for the mission.

On July 25, Ofir managed to continue returning fire despite his ammunition running out. In the deadly firefight that was taking place all around him, Ofir had the clarity of thought to utilize the ammunition from his injured fellow soldiers in order to cover the retrieval and evacuation of wounded. He himself was injured in the incident, but continued returning fire and encouraging his fellow soldiers to do the same.

Elbaz, for his part, maintained his position under heavy gunfire and a barrage of grenades fired at him. While his comrades took cover in a nearby mosque, Elbaz took out four terrorists before his weapon malfunctioned.

On July 20, Vislitzky saw that his tank commander had been injured. He not only took his commanders place while calling for help and covering the evacuation team, but he returned with his tank to the field, taking the place of acting commander as well as loader for an entire night.

On top of the specific citations awarded, the IDF has decided to recognize the 50 day campaign as a fully fledged war. Defense Minister Moshe Ya’alon has asked the Ministerial Committee to attribute symbols and hold ceremonies appropriate for what is now being recognized as a war. This will be the first time decorations will be given out to veterans since 2006. All soldiers who participated in the conflict will be receiving a campaign decoration.

This will be only the eighth time that war decorations will be given out by the IDF. The first seven were for the War of Independence, the Sinai War, the Six Day War, the War of Attrition, the Yom Kippur War, Operation Peace for the Galilee and the 2006 Second Lebanon War.

The decorations will also be extended to the Israel Security Agency (ISA or Shin Bet), Mossad, Police and Prisons Authority, as well as civilian security officers in the southern communities and members of the Fire Brigade, Magen David Adom and other emergency services.

Among the other 48 soldiers receiving citations were five who received them posthumously, having been killed in action. Four women also received citations for their service in the field.