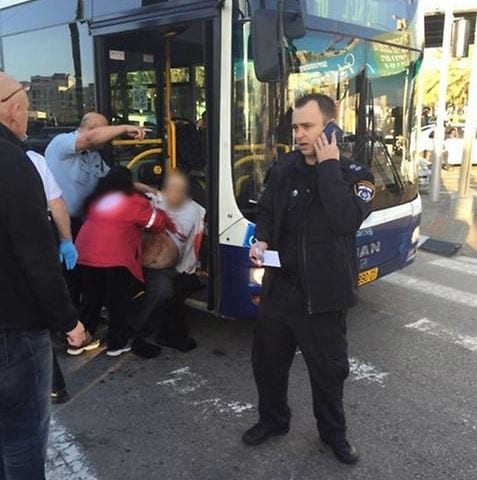 More than a dozen people were wounded in a Palestinian terror attack Wednesday morning when a terrorist boarded a bus in Tel Aviv on began stabbing morning commuters.

The terrorist, who is initially identified as a 23-year-old Palestinian from Tulkarem in Samaria, was shot and apprehended by Israeli police. He had entered Israel illegally. Palestinian social media later identified the attacker as Hamzu Muhammad Hassan. Under interrogation, Hassam told the Shin Bet that he “was spurred by Gaza war, paradise.”

The stabbing took place on the #40 Dan bus line on Begin Road near the Maariv Bridge intersection. The busy line runs from Bat Yam to northern Tel Aviv.

According to witnesses, the terrorist boarded the bus and stabbed the driver first. With the driver seriously injured, he was unable to open the rear doors of the bus to allow passengers to escape. The doors were reportedly forced open by one of the passengers.

While on the bus, the terrorist stabbed several passengers. He then fled and was chased by police on Hamasger Street.

According to police, a team from Israel Prison Service’s elite Nachshon unit happened to be driving behind the bus during the attack. They were accompanying prisoners to a Tel Aviv courthouse. Security forces realized what was happening and chased the terrorist. They eventually shot him in the leg and arrested him.

“We identified in the area of the Maariv Bridge larger gathering, and people crying for help,” explained Benny Botershvili, the commander of the Nachshon Unit and the man who shot the terrorist, to media.

“After an initial assessment, we understood it was a terrorist incident. I and a team of three Nachshon fighters identified the terrorist and chased after him. We shot towards his legs, the terrorist collapsed and fell, we handcuffed him, and waited for the police to arrive.”

Most of the stabbing victims were lightly injured. Four are reported in serious condition and were evacuated to Ichilov, Wolfson and Tel Hashomer hospitals. A senior doctor treating the victims told Channel 2 that based on the wounds, the terrorist was using a long knife. Hospitals used 80 units of blood to treat the injured.

The news channel also reported that the bus driver, who was seriously hurt in the attack, called a colleague to his right after the attack and told him, “If anything happens to me, look out for my children.” The Dan bus company praised the drivers heroism during the attack.

United Hatzalah medic Aharon Klein, who had been nearby, told Breaking Israel News he raced to the scene on foot to provide emergency triage, treatment and communication. Noticing the lightly injured passengers exiting the bus he instructed them to sit down and await additional medical forces.

He passed security forces, who had neutralized the terrorist with a gunshot to the leg, and climbed onto the bus. The bus driver and 2 other passengers suffered from serious injuries to their neck and upper body. He treated the most seriously injured person with a neck wound and directed additional forces to the other seriously injured commuters.

“I noticed the lightly injured passengers first but realized that it would be the more seriously injured people in the bus because the nature of their injuries limited their mobility,” he explained.

WATCH: United Hatzalah at the Scene of the Attack

Tel Aviv District Police Chief Bentzi Sau told media at the scene that the bus driver fought with the terrorist. He praised the members of the Nachshon Unit who realized something was happening on the bus due to its sudden erratic driving.

On Twitter, Hamas official Izzat al-Rishq praised the stabbing attack, calling it a “heroic and daring” operation against the “Zionists.” He said the attack was “a natural response to the occupation and terrorist crimes against our people.”

Hamas official Hudam Badran wrote on Facebook: “The stabbing in Tel Aviv highlights our people’s insistence on continuing the resistance in all its forms. It is a normal response to the crimes of the occupation against our people. We praise this extraordinary act and call for more devotion, as well as individual and collective resistance.”

Israeli officials were quick to condemn the attack. Israeli Prime Minister Benjamin Netanyahu blamed the Palestinian Authority. “The attack in Tel Aviv is the direct result of the poisonous incitement spread by the Palestinian Authority toward Jews and their state,” he said in a statement. “The same terror tries to harm us in Paris, Brussels and everywhere.”

“The ones who rushed to praise this attack are Hamas, Abu Mazen’s partners in the unity government,” he continued. “This is the same Hamas that announced they would sue Israel in the International Criminal Court in The Hague.”

“The ones who stand behind the attack this morning in Tel Aviv are those who also stand behind the riots in Rahat, and stood behind the wave of attacks in Jerusalem: Abu Mazen, Haniyeh, Raed Saleh, Hanin Zoabi, Ahmed Tibi, and their partners,” he stated.

“They are all part of a process of undermining the right of Israel to exist as a Jewish state, and it doesn’t matter to the whether it’s in Judea, Samaria, the Negev, the Galilee, Tel Aviv, or Jerusalem. All of them are part of the same wing whose goal is to eradicate the Jewish state.”

VIDEO OF THE TERRORIST AFTER BEING SHOT