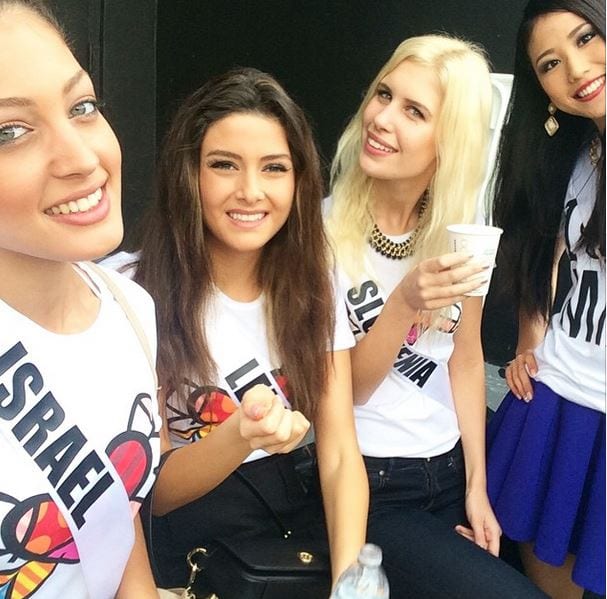 Miss Lebanon, Saly Greige, has come under fire recently by her country’s government for taking a picture with Miss Israel ahead of the Miss Universe pageant in Miami. In Lebanon, it is illegal for Lebanese citizens to fraternize with Israelis.

Criticism came rolling in after Miss Israel contestant Doron Matalon posted a photo on her Instagram of a selfie of herself, Miss Lebanon, Miss Japan and Miss Slovenia. In the photo, the four women appear smiling and posing with one another.

The photo, which was widely circulated on Lebanese social media, brought harsh backlash against Greige for posing with the Israeli contestant. Critics called for Greige to be stripped of her title.

In response to the condemnation, Greige took to Facebook and explained that the Israeli contestant had “photo-bombed” the picture.

In a statement, Greige wrote: “The truth behind the photo: Since the day of my arrival to participate to Miss Universe, I was very cautious to avoid being in any photo or communication with Miss Israel (that tried several times to have a photo with me.”

“I was having a photo with Miss Japan, Miss Slovenia and myself; suddenly Miss Israel jumped in, took a selfie, and put it on social media…this is what happened and I hope to have your full support in the Miss Universe contest.”

This is not the first time a beauty contestant has come under hot water for fraternizing with an Israeli. In 1993, the government disqualified its Miss Universe representative after AFP ran a photo showing her arm-in-arm with the Israeli contestant.

Matalon responded to the controversy with a Facebook post of her own, saying that Griege’s reaction “doesn’t surprise me, but it still makes me sad.”

“Too bad you can not put the hostility out of the game, only for three weeks of an experience of a lifetime that we can meet girls from around the world and also from the neighboring country.”

The Miss Universe pageant will take place on Sunday, January 26.