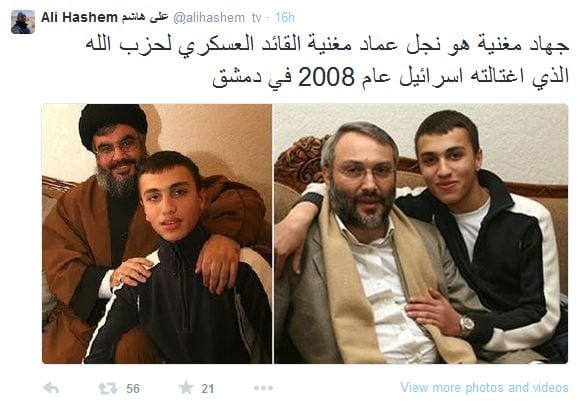 Six Hezbollah terrorists, including a senior commander, were killed in an Israeli airstrike in the Syrian Golan Heights on Sunday, the terror group confirmed.

“A group of Hezbollah mujahedeen were martyred in a Zionist rocket attack in Quneitra, and their names will be revealed later,” a message on Hezbollah’s Al-Manar news channel stated.

Late Monday, it was also revealed that aside from the six Hezbollah terrorists, six Iranian field operatives belonging to the Iranian Revolutionary Guard Corp were killed in the strike as well.

“General Mohammad Ali Allahdadi and a number of fighters and Islamic Resistance (Hezbollah) forces were attacked by the Zionist regime’s helicopters,” said a statement on the Guards’ website. “This brave general and some members of Hezbollah were martyred.”

According to Hezbollah, the men were killed during what they said was a reconnaissance mission in the Mazraat Amal village in the Quneitra region. The strike targeted two Hezbollah vehicles that were operating close to the border with Israel.

Al-Mayadeen, a Hezbollah affiliated news outlet, reported that two Israeli reconnaissance planes were patrolling the area around the time of the strike.

“While a group of Hezbollah fighters were on a field inspection of the town, Mazrat al-Amal… They faced rocket shelling from helicopters of the Israeli enemy, leading to the martyrdom of a number of holy warrior brothers…” Hezbollah said in a statement.

Hezbollah fighters in villages near the border with Israel were put on high alert following the strike. In southern Lebanon and in Beirut, streets emptied and residents feared an escalation.

In response to the strike, Hezbollah vowed retaliation against Israel. “The attack on six Hezbollah members will be answered with a painful and unexpected response, but it can be assumed that it will be controlled so as not to drag into a wide-spread war,” a Hezbollah source told Lebanese newspaper Al-Safir.

The IDF has refused to comment on the incident.