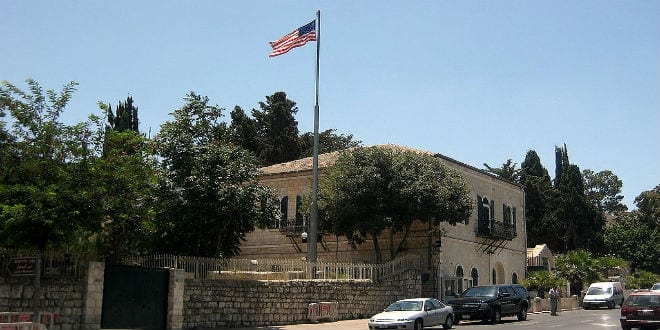 Three Israeli security guards serving in the US consulate in Jerusalem have quit over plans to hire and arm 35 new Palestinian guards in violation of a 2011 agreement, reported Yedioth Ahronoth Wednesday. The new guards have been training in an American facility in Jericho.

According to the paper, in 2011, the US consulate was permitted to retain about 100 handguns for the use of security staff, on condition those who handled them were Americans or Israel Defense Force veterans. Palestinians from East Jerusalem serve on the consulate’s security staff, but until now, none of them have been armed.

Sources told the paper that began to change a year and a half ago, when Regional Security Officer Dan Cronin began working there. Since then, employees claimed, seven Israelis have been fired, while only one Palestinian has lost his job.

Employees accused Cronin of voicing pro-Palestinian, anti-Israel opinions. “The law in Israel is merely advice to him,” they told the paper. “Cronin does what he wants. He doesn’t want the Israelis in the consulate.

“The consulate’s conduct is extremely biased towards the Palestinian side, and Cronin is actually raising an armed militia of Palestinians in the consulate. They’re trained in weapons use, Krav Maga, and tactical driving. This is irresponsible. Who is ensuring that putting this weaponry in Palestinian hands will not lead to terror?”

According to the unnamed employees, the new guards are being trained in the US as well as Jericho, and some have terrorist connections. Ynetnews (the English edition of Yedioth) reported, “the most senior advisor to the consul general is a Palestinian who served time in Israeli prison because of membership in the PLO.” Another is a relative of a Hamas leader in Jerusalem, Mohammed Hassan Abu Tir, who has served several prison terms in Israel.

The staff also accused the consulate of retaining machine guns and rifles on the premises, which contravenes the agreement, as well.

The consulate refused to respond to the accusations in the media, stating, “The United States’ consulate has complete faith in the professionalism of its staff,. We do not discuss security for our diplomatic delegation, but note that there are many inaccuracies in the claims. Furthermore, we coordinate our work with local authorities in a complete and ongoing manner.”

The consulate refused to elaborate on the alleged inaccuracies.

Israel declared Jerusalem its undivided capital in 1967, after reunifying the city during the Six Day War. Many countries, however, refused to recognize Israel’s claim to the eastern part of the city, and as such keep their embassies in Tel Aviv, maintaining only consular services in Jerusalem.

The Tel Aviv embassy handles Israeli affairs, while the Jerusalem consulate handles Palestinian affairs. As such, ambassadors based in Jerusalem make frequent trips to Area A, the “West Bank” region under Palestinian control which is off-limits to Israelis. They require non-Israeli armed escorts for such trips.