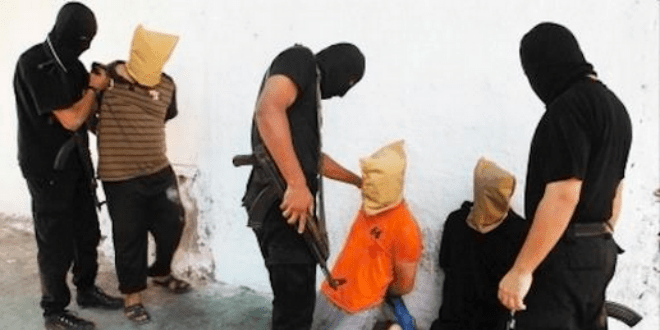 Security officials in Israel estimate hundreds of local terrorists are leaving Hamas’s service for the Islamic State (ISIS), reports Israel National News. Following the discovery in November of an ISIS cell in Hebron, south of Jerusalem, investigators say these religious extremists are dissatisfied with Hamas’s stance and are looking for a more hardline approach.

Ahmed Wadah Salah Shehada (22), leader of the Hebron cell, told Israel Security Service (Shin Bet) investigators that he switched organizations because Hamas was too “moderate” for him, in that it did not enforce Sharia law, according to a Channel 2 reported referenced by INN.

“This cell was just the tip of the iceberg,” a security source was quoted as saying. “There are terrorists who are tired of Hamas because it is portrayed as moderate and not aggressive and extremist enough against Israel.”

He continued “…they see ISIS as an organization that implements the Islamic laws – Sharia. Hamas is under great pressure from this phenomenon which is slowly eating into its power. ISIS is entering into this vacuum.”

Hamas has tried to deny the presence of ISIS in Gaza, but the group was already there during the summer’s military operation, Protective Edge, involved in attacks against Israel. It also claimed responsibility for a bombing attack on Gaza’s French Cultural Center in October.

ISIS is recruiting fighters in Israel via social media such as Facebook, Shehada revealed.  Shehada admitted “it started around a year ago. I contacted Al-Nusra Front and ISIS activists through their Facebook pages.”

“My intention was to join them in the fighting in Syria, against the (Bashar) Assad regime. After several talks that I had with my friends in Hevron, I decided not to fly there, and (instead) establish an ISIS cell in Hevron,” said Shehada.

“Our goal was to establish a cell that would conduct attacks against the IDF and the Palestinian Authority,” said Shehada, noting that Israel wasn’t the only target. “We understood that Hamas isn’t doing the job. We downloaded from the ISIS site posters and pictures and distributed them to residents.”

The Hebron cell was meant to kidnap an Israeli soldier during the Muslim month of Ramadan. “The plan was to take (a soldier’s) rifle, to hide his body in a water hole and to take his uniform to conduct a shooting attack against soldiers,” said Shehada.

Shehada was not the only cell member providing information which was cleared for publication. Another associate claimed, “we believe that ISIS is better than Hamas and the Palestinian Authority, who don’t do anything for the residents.”

“We held a few meetings in Hevron, with the goal being to acquire rifles and pipe bombs that we could use against soldiers and Palestinian police stations in Bab el-Alzawiya,” he said. “We looked at all kinds of websites and learned how to produce pipe bombs.”