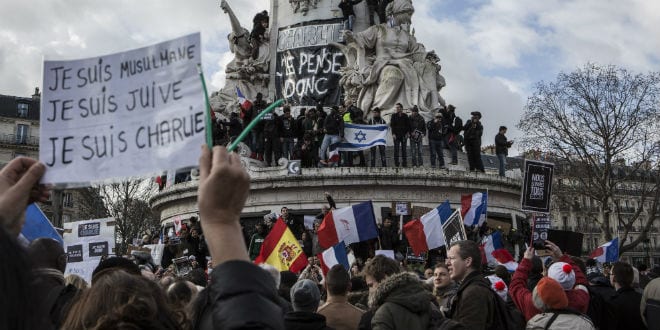 While millions of people took part in a march that was attended by over 40 world leaders in Paris on Sunday, another simultaneous event took place that came as a result of numerous violent attacks of hatred against the French Jewish community.

The Jewish Agency for Israel held an information fair providing hundreds of French Jews with valuable information on immigrating to Israel, what is known in Hebrew as Aliyah. The fair was under tight security following the twin terror attacks that occurred in France. The timing of the fair was a coincidence, as it had been planned weeks in advance of the past week’s tragic events.

Chairman of the Executive of the Jewish Agency for Israel Natan Sharansky accompanied Israeli Prime Minister Benjamin Netanyahu to Paris, with the intent of attending the fair.  In a statement, Sharansky said, “The Jewish Agency embraces the French Jewish community at this difficult time and is extending its full support by helping to provide for the physical security of Jewish communities across France, increasing our assistance to any individual who wish to immigrate to Israel, and working to ease immigrants’ integration into the Israeli workforce and Israeli society.”

Netanyahu was one of 40 heads-of-state and dignitaries who attended the march. It is estimated that more than 1.5 million people attended the rally. Israel’s Prime Minister walked arm in arm with the President of Mali, Ibrahim Boubacar Keita. Mali is not only a country who has a Muslim majority, but it is also the homeland of Lassana Bathily, the hero of one of Friday’s attacks.

Bathily, a young Muslim immigrant from Mali who worked at the kosher supermarket where four Jews were murdered by a terrorist, was at the time of the attack in the store’s underground stockroom. When gunman Amedy Coulibaly burst in upstairs, Bathily turned off the stockroom’s freezer and hid a group of frightened Jewish shoppers inside.

Bathily then snuck up through a fire escape to speak to police about what was occurring in the store. Initially confused for the attacker, he was forced to the ground and handcuffed. Once the police realized their mistake, Bathily gave the police key information which allowed them to open the metal shutters surrounding the store, and mount their rescue.

According to The Jewish Agency’s figures, 2014 saw a dramatic increase in Aliyah from France with the arrival of 7,000 new immigrants, the most from any country in the world, and more than double the 3,400 who arrived in 2013 and triple the 1,900 who came in 2012. The French Jewish community is the largest in Europe and the third-largest in the world (after Israel and the United States), with some 500,000 Jews.

The rise in immigration to Israel is coming upon the heels of numerous anti-Semitic attacks which have occurred throughout the country.

Even before the most recent events, Jewish Agency officials had predicted that the increase in French Aliyah would continue and that the number of immigrants from France would reach 10,000 in 2015.

In light of the recent increase in French Aliyah, The Jewish Agency has been working closely with the Israel Ministry of Aliyah and Immigrant Absorption to ease the immigration and absorption process as well as to enable thousands of French Jewish young people to visit and experience life in Israel via Jewish Agency programs.

At the same time, The Jewish Agency is playing an active role in providing for the physical security of Jewish communities across France. The Fund for Emergency Assistance to Jewish Communities, which was established following the attack against the Jewish school in Toulouse in 2012, has provided Jewish communal institutions in France and elsewhere with the means to install and reinforce security measures where they are most needed, in order to enable Jewish communal life to continue as uninterrupted as possible.