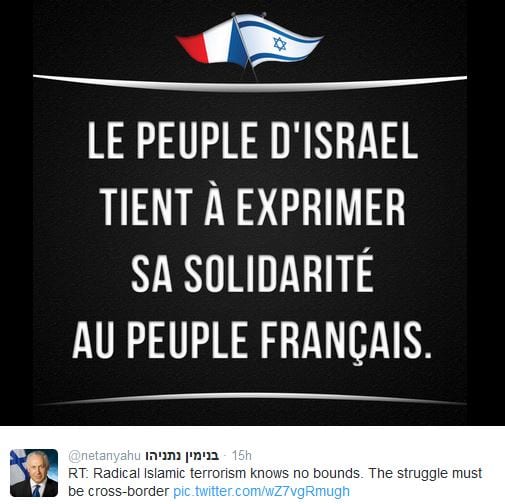 Israeli Prime Minister Benjamin Netanyahu condemned the deadly attack on a French satirical magazine on Wednesday, issuing a statement of solidarity with the French people and offering condolences to the families of the slain.

Earlier in the day, three gunmen stormed the Paris offices of the Charlie Hebdo magazine. Twelve people were methodically killed in cold blood, including a prominent French satirical cartoonist, and many others injured.

“On behalf of the citizens of Israel, I offer condolences to the President of France, the bereaved families and the French people,” the prime minister said in a statement after the attack. “Israel stands with you on this difficult day. Two years ago we saw a great intensification of international terrorism and terror that originates from radical Islam. Radical Islamic terrorism knows no bounds, and there the struggle which must know no border,” Netanyahu continued.

“I stood at the UN podium a few months ago, and I said that if the terrorist fanatics of Hamas, Hezbollah, the Islamic State and al-Qaeda will not be stopped here, [the attacks] will spread all over the world, and if we do not fight it consistently, determinedly and unitedly, these horrible acts that we have seen today in Paris, will not be the last, and they will be horrible and difficult.”

The prime minister called on all “free societies and all civilized people” to “unite and combat this terrorism.” He added that the motive of radical Islamist terrorists was to “destroy society and nations, to uproot human culture which is based off freedom, and the freedom to choose.”

“Combating them means physically fighting, fighting against their false argument, and under no circumstances accepting the various justifications for their motives,” Netanyahu concluded.

Former president of Israel, Shimon Peres, said that the attack highlighted the need to protect the values of liberty and freedom. “France, a nation that has placed human liberty as its top priority, was attacked today because of its values. We send our condolences to the twelve victims’ families, they are soldiers who guarded freedom and fell in the line of duty,” he said in a statement.

“This is a real battle between the civilized world and the world of darkness which indiscriminately murders. The choice we face is either freedom or terrorism, the two of them together cannot exist,” Peres continued. “I am sure that despite the pain, liberty will prevail, we must all mobile everywhere in every way to cut off the head of the snake.”

The violence is France’s deadliest postwar attack. Shouting “Allahu Akbar!” as they fired AK-47’s inside the Charlie Hebdo offices, the terrorists are said to speak flawless, unaccented French.

Wednesday’s attack claimed the lives of some of France’s best satirical cartoonists. The Charlie Hebdo magazine has a history of publishing cartoons depicting Mohammad, something which is considered forbidden in Islam.

Among the slain were Editor-in-chief Stephane Charbonnier, known as Chard, and the cartoonists known as Tignous, Cabu and Wolinski, who have published caricatured of the Mohammed. In total, eight journalists, two police officers and a guest of the magazine were killed.

Hours after the attack, three suspects were identified by French authorities. Brothers and Paris-born nationals of Algerian descent Said Kouachi, 34, and Cherif Kouachi, 32 remain at large. Hamyd Mourad surrender to police Wednesday evening after realizing that his name was circulating on social media as a prime suspect.

French officials said that the younger Kouachi brother was an active jihadist working inside France between 2003 and 2005. He attended rallies urging French Muslims to join jihadists in Iraq to fight against the US army, Metronews reported.

In 2008, he was convicted on terrorism related charges and sentences to three years and 18 months in prison.

Hours after the shooting, radical Islamist organizations around the world praised the attack. On social media, ISIS and al-Qaeda sympathizers fought over which group could claim credit for the attack. An al-Qaeda affiliated tweeter told AP that the attack is “inspiring.”

“The lions of Islam have avenged our Prophet,” said Abu Mussab, a Syrian ISIS fighter, to AFP. “These are out lions. It’s the first drops – more will follow…let these crusaders be scared because they should be.”

LISTEN BELOW: Israeli Counter-Terror Expert: ‘France Has a Big Problem’