Israel’s Power Company says ‘Lights Out’ to the Palestinian Authority 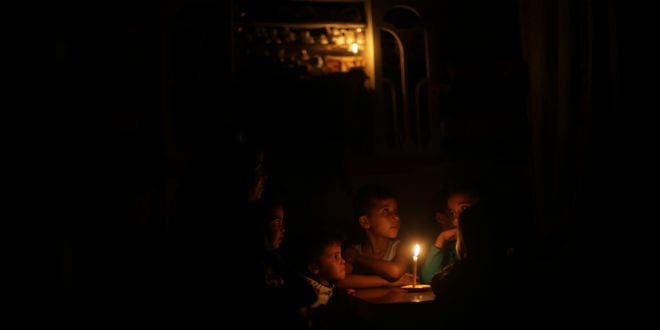 In a move that many Israelis have hailed as being far too delayed, the Israel Electric Corporation (IEC) has given an official warning to Israeli security chiefs that they will be stopping the flow of electricity to the Palestinian Authority, including Gaza, in the near future.

The company’s CEO, Eli Glickman, warned Israel’s security chiefs in a letter this week that the company would begin to limit the electricity that it provides to all territories controlled by the PA and the Jerusalem District Energy Company (JDEC). JDEC purchases electricity from Israel and sells it to various cities in Palestinian areas.

According to the IEC, the stoppage is due to the outstanding debt incurred by both bodies that currently totals NIS 1.7 billion ($429 million). The PA has built up a staggering debt and has made no effort to pay any of it off.  The debt has been causing intense financial difficulty for the IEC and Israeli consumers, who have so far been forced to bare the brunt by paying higher electricity prices to offset the debt owed.

The letter stated, “The debt imposes a heavy burden on the company’s cash flow. In light of the aforementioned facts, the Electric Corporation, with me as its chief, worked and will work as much as it can to collect the debt under discussion in order to preserve its financial stability.”

“We therefore have no other choice, and the Electric Corporation, as a supplier of an essential service that is committed to all its customers, is obligated to begin working in the coming days to collect with the following methods: 1. limiting the power supply; 2. not connecting new customers in areas the of the JDECO and the PA.”

The electricity company warned security chiefs of possible violent disturbances perpetrated by Palestinians as the IEC slowly begins cutting off power. Glickman requested that they raise alertness of all necessary forces. He further suggested that this apply to both the operational and intelligence level. Glickman stated that he is concerned  that the limiting of the electrical power supply would lead to “various responses” by the Palestinian population.

“For this reason, as long as there is no other decision on the subject made by the government and approved by the committee, the company will act to collect the debt as described,” wrote Glickman.