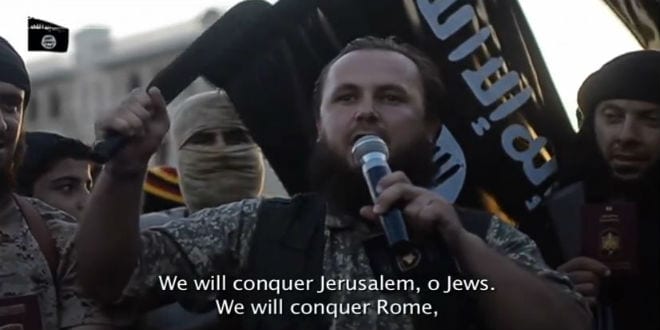 In its ongoing war with all things not Muslim, ISIS militants are imprisoning Christians in churches and torturing them if they refuse to convert to Islam, reports The Sunday Times. It is also stripping churches of their religious symbols, destroying them or selling the artifacts to fund their terror regime.

The strict Sunni adherents of ISIS offered Christians several options as they conquered large swathes of Iraq and Syria: flee the region, pay a head tax, convert to Islam or die. Strict rules have been imposed, including forbidding Christian worship in public or repairs to damaged churches.

This is not the worst, however. According to Abu Aasi, a priest from Mosul who spoke to the Sunday Times, the Bahnam Wa Sara and Al Kiama churches in the nearby town of Qaraqosh “are being used as prisons and for torture.

“Most inside are Christians and they are being forced to convert to Islam. ISIS have been breaking all the crosses and statues of Mary. Three of the Christian prisoners died because they were sick and nobody cared for them,” he added.

According to Agenzia Fides, St. George’s monastery has been turned into a prison for women. “ [T]here are those who fear that in the premises of the monastery, women will be forced to suffer sexual abuse,” the information service reported earlier this month.

“ISIS has a stated goal to wipe out Christianity,” Jay Sekulow, of the American Center for Law and Justice and the author of “Rise of ISIS: A Threat We Can’t Ignore,” told FoxNews.com. “This why they are crucifying Christians – including children – destroying churches and selling artifacts. The fact is, this group will stop at nothing to raise funds for its terrorist mission.”

“We know that ISIS considers several groups – including Christians – as ‘infidels without human rights,'” Sekulow said. “ISIS jihadists commit violence against fellow Muslims in violation of Islamic law. They routinely commit war crimes and engage in torture in violation of international law; and they also kill and threaten Christian, Jewish, and other religious communities.”

“In short, ISIS is composed of religiously motivated psychopaths,” he said.

LISTEN BELOW: Why is ISIS Popularity Spreading Across the Middle East?