Put Down Your Phones! New Campaign Calls for Return to Family Through the Sabbath

Home » Put Down Your Phones! New Campaign Calls for Return to Family Through the Sabbath 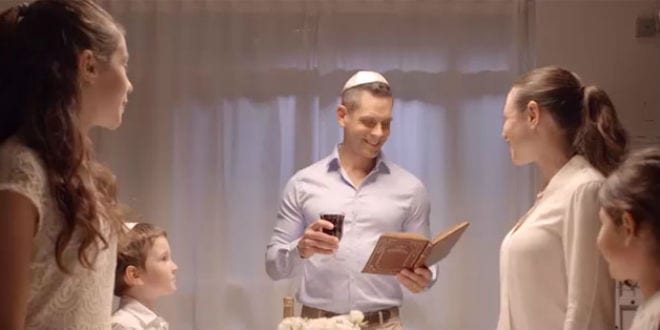 A new ad, originally aimed at promoting the values of Jewish tradition, has caused some people to rethink what the value of the Sabbath means to them. While the ad angered some secular Jews across Israel, it was aimed at promoting the idea of familial bonding time as well as reflecting upon a deeper sense of spirituality over the course of the sanctified day.

The ad depicts secular families attempting to, and failing to, create quality family time and then contrasting those attempts with a religious family. In the first few scenarios, children run amok or everyone is engrossed with their phones and not talking to one another. The religious family is seen gathered calmly around the Sabbath table reciting the kiddush (sanctification ceremony traditionally recited over a cup of wine on Friday nights).

Much of what the ad criticizes is simply the lack of familial connection that plagues many homes throughout the world. Often people find it increasingly difficult to spend time with other family members, due to other priorities taking over or becoming engrossed in their technological devices. Hence, even time set aside for the family to grow together, is squandered.

The ad promotes the idea that the Sabbath, with its unique spiritual qualities, is actually creating a different and special family bond.  Reinforced by the biblical and rabbinic commandments prohibiting the use of of many day to day items, including electricity for the most part, those who take part in the Sabbath are forced to put away their everyday distractions and focus on family.

The ad certainly brings to mind the quote by theologian Asher Zvi Hirsch Ginzburg, otherwise known as Ahad Ha’am, who said: “More than the Jewish people have kept the Sabbath, the Sabbath has kept the Jewish People.”

Ginzburg was a 19th century Zionist thinker who would later become the figurehead of a movement known as Cultural Zionism.  While being a contemporary of Theodore Herzl, he was less interested in political autonomy and governing a Jewish Homeland than he was interested in preserving Judaism by reinforcing cultural and social aspects of Judaism.

The ad, which is promoted by Shishi Yisraeli, an organization that says it wants to “draw people closer to Judaism and to emphasize and strengthen family values and national unity,” seems to fit right into the Cultural Zionist ideas espoused by Ginzburg.

Even some of the more vocal critics of the ad such as Rabbi Dr. Donniel Hartman, president of the pluralist Shalom Hartman Institute, said that “many Israelis today engage in Jewish practices and customs,” confirming again Ginzburg’s belief.

“A deep transformation has taken place in Israel over the last 15 years, and the country is now very Jewishly diverse,” he said.  “Many Israelis do not want to be Orthodox, but nevertheless, they engage in Judaism on Shabbat (Sabbath). They also engage in life-cycle events, as well as allow Judaism into other aspects of their lives. They are exploring new ways to interact with their religion on their own.”

However, the makers of the ad are trying to take a different track and encourage the celebration of the Sabbath in its entirety. The philosophy behind the ad is described by what Shishi Yisraeli put up on their Facebook page. The group there states that they “stand for bringing the value of Shabbat meals, celebrated together with the family, back to public prominence.” It also claims that “if Israeli families sit down together and strengthen their connection to each other…it could make a huge change in Israeli society.”

According to what is depicted in the ad, those ideals seem to have become less prominent the more that we enter the technological age, and need to be reinforced. It is a lesson that would make Ginzburg proud.