Nearly 1 in 3 Israelis Living in Poverty 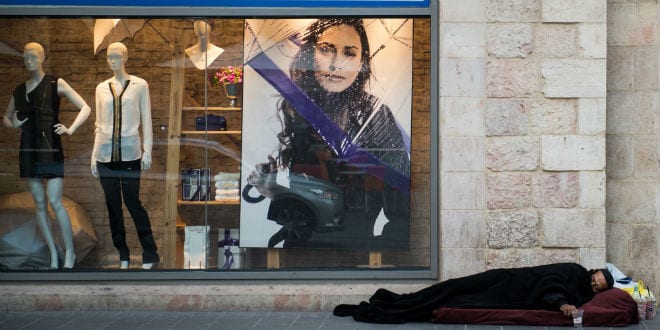 A new report on the state of poverty in Israel reveals a more troubling picture than official reports would suggest.

According to  the recently published Alternative Poverty Report by the Latet NGO, over 2.5 million Israelis live below the poverty line, including nearly 1 million children. The official report by the National Insurance Institute (NII) last week stated the poverty rate was in decline.

Latet has issued its Alternative Poverty Report each year for over a decade, measuring individual and family shortfalls in five categories considered crucial to human dignity: housing, education, health, food security and the ability to meet the cost of living.

“Poverty is not just a virtual statistical line,” said Eran Weintraub, Latet’s executive director, to Ha’aretz. “Even people who earn one shekel over the poverty line are still living in poverty, and we wanted to present a point of discussion on the topic.”

According to the Latet study, conducted in cooperation with the Ethical Research Institute and two other research groups over six months, shows 29.8 percent of Israelis are impoverished, with about 13.8 percent suffering in severe poverty.

35.1 percent of children are poor across the country, rates among the Arab and Ultra-Orthodox sectors rising to over 40 percent. The information was gathered by a survey and poverty was defined as lacking in at least three of the crucial categories mentioned above.

Some of the heartbreaking results include 65 percent of impoverished parents who had to forego medication for their children at some point this year, more than a third of children in poverty who must work to help support their families, and 92 percent of elderly poor who could not afford nursing care or help at home.

“Combating poverty is a war of necessity as important as that against [terror organizations] Hamas and Hezbollah, because every third child living in destitution on a daily basis is also an existential threat to our society,” Weintraub said in The Times of Israel.

“With the impending [March 2015] elections, we need to ask ourselves: what is what is more important, defense and security…or financial and social security?” he added. He was also quoted in the Jerusalem Post saying, “The status of the middle class is eroding and many are joining the poor. If we want social cohesion and social resilience, we must make sacrifices and fund the fight against poverty.”

The release of the report caused a political uproar, as well. Former President Shimon Peres criticized the government, saying, “you can’t feed hungry children and elderly people with proclamations to the media.”

“This report is fierce indictment against ourselves,” Peres said. “The parties must make treating the needy a priority in the elections.”

“Netanyahu prefers to transfer hundreds of millions of shekels to isolated settlements in a gesture to the Likud Central Committee and continues to ignore the plight of Israeli society,” a statement released by the Yesh Atid party read.

“The poverty figures are a poor report for the prime minister. Netanyahu wants a visitor center in the Shomron [Samaria region] instead of medication for the elderly, hot meals for schools and funds for children to buy textbooks,” the party said.

The entire report can be found here in Hebrew.