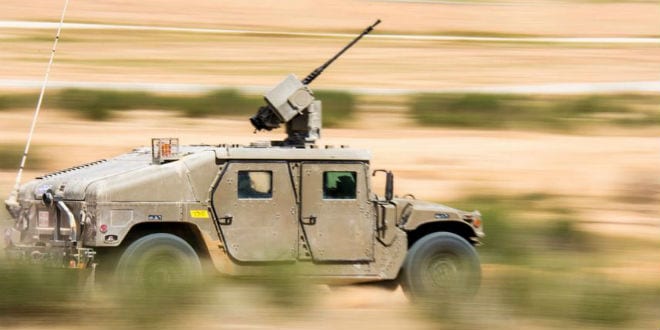 Terrorists opened fire on an IDF patrol late Wednesday morning along the southern border with the Gaza Strip, the IDF confirmed.

The patrol was on the Israeli side of the border near Kibbutz Kissufim when it came under machine gun and sniper fire. An IDF soldier was seriously injured in the attack.

“In response to the firing at our forces who were east of the fence in the southern Gaza Strip, we carried out immediate attacks against the relevant targets,” the IDF said in a statement.

Israel Radio reported that the commander of Hamas’s surveillance unit, who was operating in the area, was killed by the IDF.

Tayseer al-Ismary, 33, died after being hit with a bullet. Hamas sources said that al-Ismary was part of Hamas’s armed military wing, the Izz ad-Din al-Qassam Brigades.

Hamas warned that Israel was “playing with fire” in what it said was “a grave escalation” of Israeli action in Gaza. In a statement, the terror group added: “The occupation is fully responsible for all of the consequences of the escalation. The resistance has a right to defend itself and its people.”

Last Friday, Gaza terrorists fired a rocket into Israel, breaching the current ceasefire with Israel. The incident was the third time a rocket had been shot into Israel since the end of Operation Protective Edge in August.

In response to the attack, the IAF struck terror targets in Gaza, including a cement factory that was being used to produce materials to rebuild Hamas terror tunnels.

LISTEN NOW: Is the ‘Two-State Solution’ the Only Option for Resolving the Arab-Israel Conflict?