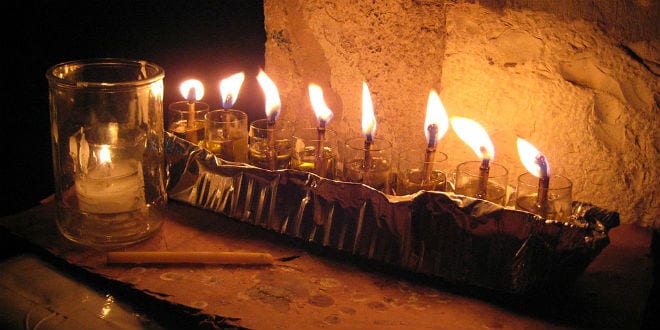 During the eight days of Hanukkah, traditional Jews add the following to their daily prayers: “In the days of Mattathias the son of Johanan the High Priest, the Hasmonean and his sons, when the evil kingdom of Greece set upon your nation Israel to make them forget your  teachings, and to remove them from the laws you desire, you in your great mercy…gave the mighty into the hands of the weak, the many into the hands of the few, the impure into the hands of the pure.”

Sound familiar? The little history lesson in this prayer is probably very close to the story of Judah Maccabee and King Antiochus you remember from Hebrew school: The underdog heroes attain a miraculous victory over the powerful villains against all odds, winning back their religious freedom and purifying the defiled temple in Jerusalem.

That’s the short story. The longer version is not quite as heartwarming or morally clear-cut. Ancient historical records, especially the little known Book of Maccabees, actually tell of a bitter and bloody internal conflict that pitted Jew against Jew in a fight for political and religious domination.

Towards the end of the fourth century BCE, Greek Hellenistic culture had spread to every part of Alexander the Great’s massive empire, and Judea was no exception. Certain Jews, mainly those belonging to the wealthy elite of Jerusalem, enthusiastically embraced the offerings of this culture—Greek names and dress, the gymnasium, even the Greek gods—and curried the favor of Alexander’s heirs, the ruling Seleucids, in return for their cooperation.

The poorer farming communities of the rural Judean countryside, however, resisted the changes that were sweeping the ancient world, unwilling to give up the traditional Jewish beliefs and customs of their ancestors.

The focal point of the conflict was often the high priesthood, which at the time was the most powerful office in the land. Tensions boiled over when Hellenized Jews paid Seleucid king Antiochus Epiphanes (the famous Antiochus of the Hanukkah story), to replace the reigning high priest with a Hellenist sympathizer who was not born of the priestly line.

At the time, explains famed Jewish historian Solomon Grayzel, Antiochus’ actions were economically and politically motivated, and had nothing to do with suppressing Jewish religion. After all, there is no record of him imposing anti-Jewish policies on the many diaspora Jewish communities under his rule. However, when Antiochus’ power play sparked an uprising in and around Jerusalem, he reacted harshly by banning circumcision and observance of dietary laws within Judea, and erecting a statue of Zeus in the Holy Temple.

Now the growing rift in Judean society blew wide open. Hellenized Jews not only supported the repressive policy, but also helped Antiochus’ men violently enforce it in the traditional Judean villages. In response, when the traditionalists rose up under the leadership of Mattathias, their fury was directed at their Hellenized countrymen.

1 Maccabees reports that Mattathias’ followers, called hasidim, or “pious ones,” slaughtered assimilated Jews and circumcised male children by force. Fearing for their lives, well-connected Hellenists called upon the Seleucid armies for protection, and it is with the ensuing battle that the well-known version of the Hanukkah story begins.