Prime Minister Kicks Off Hanukkah in Israel with IDF

Home » Prime Minister Kicks Off Hanukkah in Israel with IDF 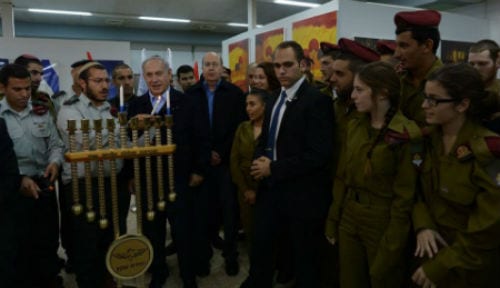 Celebrating the first night Hanukkah, Israeli Prime Minister Benjamin Netanyahu gathered with soldiers of the IDF to light the first candle of the menorah and kick off the holiday.

Attended by Defense Minister Moshe Ya’alon and soldiers from the Lotar (counter-terrorism and hostage rescue) and Oketz (canine special forces) units of the IDF, the prime minister paralleled Israel’s fight for existence in modern times with the miracle of Hanukkah.

“I am proud to be here and light the first Hanukkah candle with you in the birthplace of the Maccabees,” he said. “We then stood, the few against the many, and we won. We set light against the darkness and we were victorious.”

“This battle is also taking place today. The battle for Israel’s revival is not over; it is taking place always,” Netanyahu added.

The prime minister shared a bit of personal family history, recalling the story of how his grandfather came to Israel with a vow to carry out the legacy of the Maccabees.

“I am here because my grandfather, Rabbi Natan Milkovsky Netanyahu, as a young person, studied in a yeshiva in Lithuania and one day he worked in a railway station with his younger brother Yehuda. He saw a group of anti-Semitic hooligans. They identified them as Jews, the yeshiva students, and they fell upon them. They ran toward them with clubs, shouting ‘Death to the Jews.””

“My grandfather told his younger brother Yehuda, ‘Run, I will stop them.’ He understood that he was going to sacrifice himself to save his younger brother. He was savagely beaten until he was almost dead. Sprawled in the mud and the snow, he told himself, ‘What a disgrace that the descendants of the Maccabees lay sprawled here in blood and dirt.’ Before he lost consciousness he vowed, ‘If I live, I will take my family and go to the Land of Israel in order to renew Jewish independence there and the Maccabees will rise again.’”

Netanyahu praised the IDF, which he called “the most moral army in the world,” for defending the Jewish state against extremism. The prime minster thanked Israel’s modern “Maccabees [who] have arisen again to defend the Jewish people” from “darkness.”